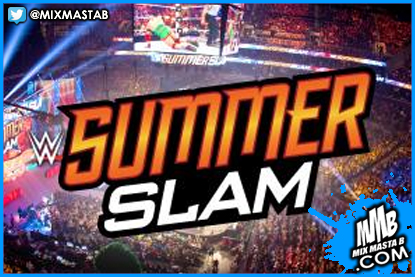 WWE, Barclays Center and iHeartMedia have announced that the first WWE SummerSlam Concert will take place Thursday, Aug. 18, at 7 p.m. ET at Brooklyn’s Barclays Center, with proceeds benefiting Connor’s Cure, a fund to help further pediatric cancer research.
The announcement was made by Stephanie McMahon on "Elvis Duran and the Morning Show."
Tickets for the concert, headlined by hip-hop recording artist Flo Rida and international pop superstar Jason Derulo, will go on sale this Friday, July 29, at 12 p.m. ET at Ticketmaster.com. The concert is part of WWE’s week-long lineup of events, including interactive fan experiences and community outreach programs, culminating with SummerSlam on Sunday, Aug. 21, at 7 p.m. ET from a sold-out Barclays Center and live on WWE Network around the world.

The WWE SummerSlam Concert will also include performances by recording artist Daya and emerging hip-hop recording artist Jordan Hollywood, as well as appearances by WWE Chief Brand Officer Stephanie McMahon, WWE Executive Vice President Talent, Live Events & Creative Paul “Triple H” Levesque and many WWE Superstars.
A portion of proceeds from the concert will benefit Connor’s Cure, and be distributed to leading research centers and hospitals nationwide. In 2014, Connor’s Cure was created by McMahon and Levesque as a fund within Children’s Hospital of Pittsburgh Foundation to support pediatric brain and spinal cord cancer research. Earlier this year, WWE and The V Foundation announced a partnership to expand Connor’s Cure outside of Children’s Hospital of Pittsburgh Foundation and support cancer research nationally.
"I’m definitely honored to be a part of this spectacular event with my WWE family,” said Flo Rida. “They have been there from day one, and I truly appreciate the opportunity to perform for all my WWE fans."
“We are proud to bring together some of the biggest names in music and entertainment for one night to support Connor’s Cure,” said WWE Chief Brand Officer Stephanie McMahon. “The first-ever WWE SummerSlam Concert will offer fans another opportunity to participate in SummerSlam Week while raising much-needed awareness and funds to support pediatric cancer research.”
“Partnering with WWE is a very heartfelt experience,” said Susan Braun, CEO, The V Foundation. “The V Foundation is honored to work side by side with Stephanie McMahon, Paul Levesque and the entire WWE team to increase the amount of research devoted to children’s cancers. Our world-class scientific advisory committee, who oversees the highly competitive V Foundation Grant process, ensures that the most important work is being funded: Research that will lead to saving children’s lives.”
“We’re excited to bring the first-ever WWE SummerSlam Concert to Barclays Center through our Brooklyn Direct programming division,” said Brett Yormark, CEO of Brooklyn Sports & Entertainment. “We’re in our second year of a sold-out SummerSlam Weekend, and are proud to bring a new element of entertainment to this great series of events.”
Connor’s Cure was established in honor of 8-year-old WWE fan Connor Michalek, a patient at Children’s Hospital of Pittsburgh of UPMC who battled medulloblastoma, a rare tumor that affects the brain and spinal cord. To date, Connor’s Cure has raised more than $1 million and assisted more than 100 families around the world.
Learn more about Connor's Cure at WWECommunity.com.
Grammy nominated Flo Rida is one of music’s best-selling artists, having sold more than 80 million records worldwide.  Part of the WWE family, Flo Rida has performed at WrestleMania, hosted Monday Night Raw and participated in WWE’s Tribute to the Troops. Originally from Carol City, Fla., his 2008 breakout single "Low" was No. 1 for 10 weeks in the United States and broke the record for digital download sales at the time of its release. His 2014 single, “My House,” which was a WrestleMania 32 theme song, became his tenth Top 10 hit in the United States. His catalog also includes the international hit singles "Right Round," "Club Can't Handle Me," "Good Feeling," "Wild Ones," "Whistle," "I Cry" and "G.D.F.R."
International pop superstar Jason Derulo is one of the most successful and sought-after artists in the industry today. In the six years since ascending to superstardom, Derulo has sold more than 55 million singles worldwide, all of which have been co-written by the artist himself. His music has been streamed more than six billion times on Spotify, and his singles have aired on radio to an audience of over 17 billion since his debut single “Whatcha Say.” His four acclaimed studio albums have accumulated 11 Top 10 singles.
Platinum recording artist Daya drives pop music down a different path as an independent artist scaling the pop charts. Her single "Hide Away" went platinum in January 2016, just one month after being certified gold. With more than 50 million streams on Spotify, a Top 10 iTunes Pop sales chart placement and No. 7 on Shazam's Top 100, "Hide Away" reached a new BillBoard Hot 100 high at No. 24 earlier this year. Daya follows "Hide Away" with her second single "Sit Still, Look Pretty" and a full album to be released later this year.
South Florida rapper and songwriter Jordan Hollywood is blowing up the charts. His critically acclaimed mixtape "Sorry For This" received the highest praise from all of the major blogs and has more than 4 million streams across his social platforms. Hollywood's "Trill" has been chosen as the song of the month for the iHeartRadio Digital Artist Integration Program. His single "The Truth" is quickly becoming the hottest song in Miami, winning the 99 Jamz Battle Jamz nine times consecutively and counting. Hollywood is also a noted writer and has co-written songs for Derulo and French Montana.
WWE Universe, don’t miss the first WWE SummerSlam Concert Thursday, Aug. 18, at 7 p.m. ET at Brooklyn’s Barclays Center, with proceeds benefiting Connor’s Cure. Tickets for the concert, headlined by hip-hop recording artist Flo Rida and international pop superstar Jason Derulo, will go on sale this Friday, July 29, at 12 p.m. ET at Ticketmaster.com.
Posted by Mix Masta B at Monday, July 25, 2016