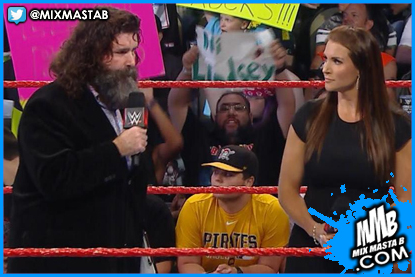 With Dean Ambrose’s WWE World Championship taking up residence as the in-house title of SmackDown Live, Raw Commissioner Stephanie McMahon and General Manager Mick Foley opened their first show of the New Era by announcing the creation of the WWE Universal Championship, the first recipient of which will be decided at SummerSlam.


McMahon and Foley confirmed former WWE World Champion and first overall WWE Draft pick Seth Rollins as one of the Superstars who will contend for the new title at The Biggest Event of the Summer and Finn Bálor earned the opportunity to face him by first winning a Fatal 4-Way and then defeating Roman Reigns, who had won a Fatal 4-Way of his own, in the main event of the first Raw of the New Era.
Get more details on this historic championship match here before SummerSlam unfolds live on Sunday, August 21 at 8/7 C, only on the award-winning WWE Network.
Posted by Mix Masta B at Monday, July 25, 2016