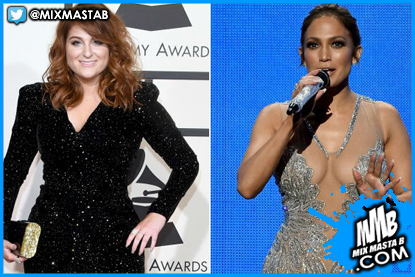 In an interview with Digital Spy, Meghan Trainor said that the hate Jennifer Lopez is getting for her new single, "Ain't Your Mama," because it was produced by Dr. Luke is completely unfair.

For those of you who don't know, Meghan co-wrote the hit. She said that when she sent the track to Jen, the former "American Idol" judge had no idea who was behind the production of it.
"I texted her the song and she had no idea - she thought I did it alone by myself at my house, which a lot of people think because I do do that," the "No" singer revealed. "I sent it to her and said, 'Do you like the song?' and she said, 'I love the song, my kid loves the song - he's made me play it five times already so I know it's a hit - when can I cut it?', so I said immediately, 'Whenever you want!'"


Meghan later admitted that "Ain't Your Mama" is one of three songs that she's recently given JLo. She just feels bad about the negative attention Jen is getting for it. Meg said, "I felt terrible when Jennifer got all the hate for ['Ain't Your Mama'], and it's just all ridiculous. It's such a big song for her."
Dr. Luke has been facing much backlash ever since Kesha made abuse allegations and filed a civil suit against him back in 2014. The "TiK ToK" singer is now vying to be removed from her Sony contract, which forces her to be in contact with the producer.
CREDIT // SOURCE - Q102
Posted by Mix Masta B at Friday, April 15, 2016