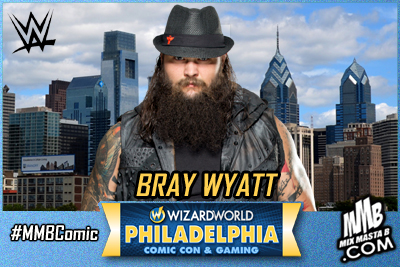 The Superstar known as Bray Wyatt seems to have stepped out of the collective population’s nightmares and into our reality. A man shrouded in mystique, he has made it his mission to bring his macabre vision to WWE.
No matter how cryptic his message to the WWE Universe might be on any given day, The New Face of Fear has made it clear that he aims to lead his flock in search of some sort of a higher purpose. And from the moment The Eater of Worlds set foot in WWE, he and his followers would not disappoint, exuding an eerie and dangerous presence as they offered a very succinct message to all opposition: “Run!”


In the course of his dark mission, The Man of 1,000 Truths has engaged a slew of Superstars in battle, including Kane, John Cena and The Undertaker himself, leaving a lasting impression on any who dared to cross his path.
Soon that path would take Wyatt into the dreaded 2017 Elimination Chamber Match, where he survived not only Cena, but also Dean Ambrose, AJ Styles, The Miz, and Baron Corbin to seize his first WWE Championship.
The New Face of Fear moved from SmackDown LIVE to Raw due to the 2017 Superstar Shake-up, but where will the scourge of Bray Wyatt take him next? Only the buzzards know for sure.
TIX INFO AVAILABLE HERE
Posted by Mix Masta B at Friday, June 02, 2017