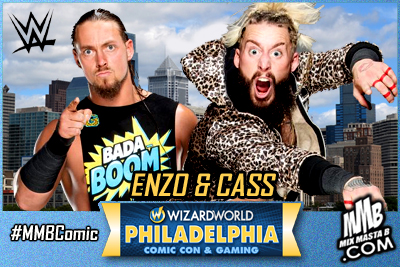 Enzo Amore is a certified G and a bona fide stud and you can’t teach that. His partner, Big Cass, is seven feet tall, and you can’t teach that. Together, they’re the realest guys in the room, and they’re here to shake up the tag team division and relieve it of haters, hangers-on and above all, “sawft”-ness.
The more agile of the two, the New Jersey-bred Amore is also the resident talker of his tag team, as efficient with his quips as he is with his fists — some would say more so. If the sticks and stones of Cass break your bones, Enzo’s words are what keep you down, a dizzying pitter-patter of slang and arrows that has already reduced some of the toughest Superstars in both WWE and NXT to twitching piles of mush. And he’s got the goods in the ring, too, using his quick-strike jabbing style to soften opponents up for the exclamation point his seven-foot partner presents.


Where these Tri-State boys go from here is anyone’s guess, but don’t be surprised if the answer to their ubiquitous “how you doin’?” involves the WWE Tag Team Championship and a whole lot of smoked jamokes laying in their wake.
Colin Cassady
This right here is Big Cass. He’s seven feet tall, and you can’t teach that. His partner, Enzo Amore, is a certified G and a bona fide stud, and you can’t teach that either. Together, they’re the realest guys in the room, and if Enzo’s brutalizing jargon doesn’t get you, Queens-born Cass’ bulldozing offense will.
Enzo & Cass are what you’d get if David and Goliath ran into each other at the Jersey Shore and decided to become a tag team, with the towering Cass filling the role of the duo’s resident juggernaut. He’s a man of decidedly few words — though it might just be comparatively less than Enzo — but he lets his fists and boots do all the talking, or shutting up, that needs to be done.
Anything but “sawft," Big Cass’ future is as bright as the Manhattan skyline and as wide as the Queensboro Bridge … not that anyone needs him to spell that out.
TIX INFO AVAILABLE HERE
Posted by Mix Masta B at Saturday, June 03, 2017