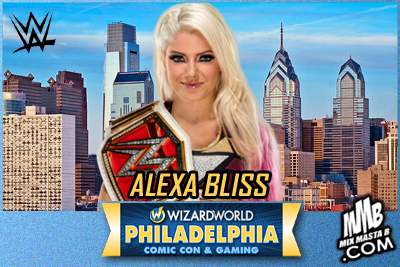 Sly, sassy and sporting a whole lot of ferocity, Alexa has been a fierce competitor her entire life, participating in softball, track and kickboxing since her youth, excelling especially in gymnastics and eventually becoming a Division I cheerleader. Alexa even entered the world of competitive bodybuilding, where she became one of the youngest competitors to receive her IFBB Professional status.


With such an incredible athletic background, it’s little wonder that Alexa quickly became one of NXT’s most dangerous female Superstars. Though she never captured the NXT Women’s Title, she was a constant threat in the division, pushing the likes of Bayley and Carmella to their limits. As a SmackDown LIVE competior, she ascended to the top of its Women’s division to become a two-time SmackDown Women's Champion. Weeks after joining Monday Night Raw in the Superstar Shake-up, Alexa Bliss made history at WWE Payback, reigning surpreme over Bayley in a hard-fought contest to become the first Superstar to win both the SmackDown Women's Championship and the Raw Women's Championship.
Bliss might be her name, but get on her bad side (which isn’t hard to do) and you’ll soon learn that there’s nothing heavenly about Alexa’s demeanor.
- See more at: http://wizardworld.com/guests/wwe-alexa-bliss#sthash.ydqr6KpU.dpuf
Posted by Mix Masta B at Wednesday, May 24, 2017