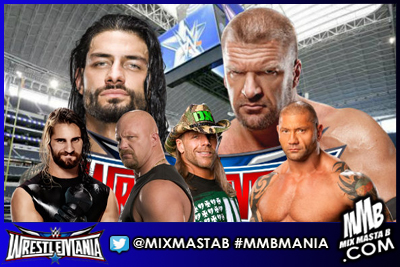 Batista was offered a WWE spot for WrestleMania, with Dave Meltzer reporting that it “would have been as the guest referee of Triple H versus Reigns.”
Batista turned it down, but WWE could now be looking at Shawn Michaels for the role. Ric Flair recently said that HBK was offered money to work at Royal Rumble, and it would make sense to have in a feature spot at the Texas WrestleMania. He isn’t going to wrestle, but the special referee spot could work well. Seth Rollins could also be in contention for the gig.


The idea would be, Hunter has one of his buddies in the stripes, thus putting the odds even further against Roman Reigns.
What could work well with Rollins, is if he completes his face turn as part of this, counting Hunter down on the night and thus setting up their feud for his return.
Meltzer also discusses the idea of having Stone Cold Steve Austin in the spot. It wouldn’t put the odds against Reigns, but it would give a neat visual at the end, with Austin and The Rock (who’ll be in the babyface corner) holding Roman Reigns’ up as the new Champion. To the mainstream media and casual audience, that would be a great picture of the old to the new franchise.
Posted by Mix Masta B at Thursday, February 04, 2016