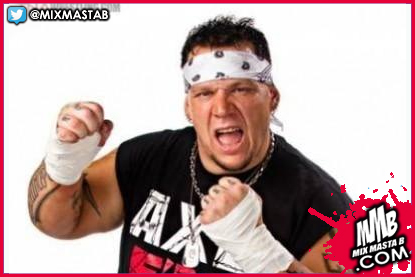 Brian Knighton, who wrestled as Axl Rotten, best known as one of the major stars of ECW, passed away today at the age of 44.  Knighton had been battling drug issues for years and had been in a wheelchair and had vowed to escape from it several months ago.
As Axl Rotten, he got his first break in 1991 with Ian Rotten in the Dallas-based GWF.  As Bad Breed, he and Ian started as a team and had a bloody feud after in ECW.  Axl Rotten & Balls Mahoney were a regular tag team from 1996 through 1999, often working with the Dudleys..  He worked for WWE briefly in 2005 as part of a team with Mahoney and wrestled once for TNA in 2010, but due to his problems, has been unable to wrestle for the past few years.
A WWE statement:
"WWE is saddened to learn of reports that Brian Knighton, best known for competing in ECW as Axl Rotten from 1993 to 1999, has passed away. WWE extends its condolences to Knighton's family, friends and fans."
Posted by Mix Masta B at Friday, February 05, 2016