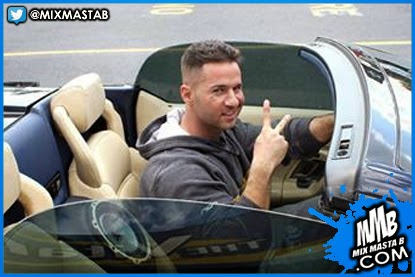 That's a situation all right.

A federal grand jury on Wednesday indicted Jersey Shore alum Mike "The Situation" Sorrentino and his brother/manager Marc, alleging they did not pay taxes on $8.9 million in income.


"According to the indictment, Michael and Marc Sorrentino filed false tax returns that incorrectly reported millions made from promotions and appearances," U.S. Attorney Paul J. Fishman said in a statement. "The brothers allegedly also claimed costly clothes and cars as business expenses and funneled company money into personal accounts. The law is absolutely clear: telling the truth to the IRS is not optional."
The brothers are charged with one count of conspiracy to defraud the United States. Marc and Michael Sorrentino are also charged with three and two counts, respectively, of filing false tax returns for 2010 through 2012. The Sitch, 32, faces an additional count for allegedly failing to file a tax return for 2011 despite earning $1,995,757.
[Related: The Situation Arrested at New Jersey Tanning Salon]
The conspiracy and filing false tax return counts each carry a maximum potential penalty of three years in prison and a $250,000 fine. The count charging the reality star with failing to file a tax return carries a maximum potential penalty of one year in prison and a $100,000 fine.
"No matter what your occupation or status in life, if you attempt to cheat on your taxes for personal financial gain, you face real consequences including criminal prosecution and a possible prison sentence," said Jonathan D. Larsen, acting special agent in charge of IRS-Criminal Investigation in the Newark Field Office.
"The charges are fiction. And it's unfortunate that the government is relying on the word of a disgraced accountant who is a proven liar," Christopher Adams, attorney for Marc Sorrentino, told ABC News. "This is not a surprise. We have been showing the government for the better part of a year now the flaws in their theory and now we'll have to show the same to court."
[Related: Jersey Shore Star Facing Federal Investigation]
A rep for The Situation has yet to comment on the indictment; however, in November, the reality star was fully cooperating with authorities when he learned he was facing a federal investigation.
"Although the nature and the scope of the investigation is not clear at this time, Sorrentino fully expects that when all the facts are revealed, no further action will be taken," a publicist said at the time.
CREDIT / SOURCE - Yahoo! Celebrity
Posted by Mix Masta B at Wednesday, September 24, 2014