Sarah Hyland Gets Temporary Restraining Order Against Ex-BF Matthew Prokop, Claims He "Choked" and Abused Her 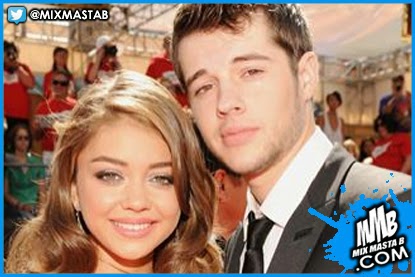 Sarah Hyland has been granted a temporary restraining order against her ex-boyfriend Matthew Prokop, TMZ reports. According to the site, the Modern Family star claims Prokop, whom she dated for five years until splitting this past August, choked her and was abusive throughout their relationship.

TMZ reportedly obtained documents in which Hyland alleged that Prokop once pinned her against a car during an argument and verbally abused her, calling her a "c--t" and choking her. In the doc, Hyland reportedly said, "His grip was so tight that I could not breathe or speak. I was scared and in fear for my life."

Hyland also reportedly sought help from costar Julie Bowen, who plays her mom on the ABC hit comedy. The documents claim that Hyland asked Bowen to come over to her house to help "peacefully end the relationship." Upon arriving at the house, Prokop allegedly "ran outside into the backyard and began screaming" and threw a lighter at Hyland, threatening to burn her house down.

After calling off the relationship, Hyland claims Prokop "relentlessly bombarded [her] with vile, threatening and emotionally disturbing texts and voicemails including his own suicide threats."
The documents also note Prokop's stint in rehab last month and claim that the facility suggested Hyland get a restraining order due to his mental state. Find out more about the restraining order.