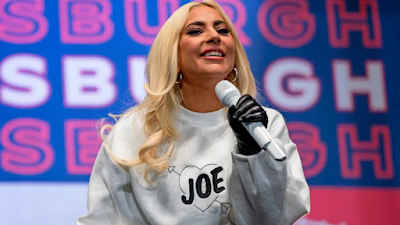 President-elect Joe Biden will have a small, in comparison to previous ceremonies, but noteworthy swearing-in ceremony on Inauguration Day. The Presidential Inaugural Committee announced Thursday morning several celebrities and community leaders who will join Biden at the U.S. Capitol on Wednesday.

Lady Gaga, who endorsed Biden and performed for him on the eve of Election Day, has been tapped to sing the National Anthem. Jennifer Lopez will also perform.

Several other stars, including Justin Timberlake and Demi Lovato, are set to perform in a virtual celebration hosted by Tom Hanks, the PIC announced on Wednesday.

Also included in the ceremony: Andrea Hall, an International Association of Fire Fighters local chapter president who will read the Pledge of Allegiance, and National Youth Poet Laureate Amanda Gorman, who will read a poem.

“We are thrilled to announce an inspired group of dynamic participants for the 59th Inaugural Ceremonies," Thursday's statement read. "They represent one clear picture of the grand diversity of our great nation and will help honor and celebrate the time-honored traditions of the presidential inauguration as President-elect Biden and Vice President-elect Harris take the oath of office on the West Front of the U.S. Capitol."

The announcement comes as the city of Washington, D.C., and the rest of the country prepare for possible security threats on and in the days leading up to the inauguration. Just two weeks prior to Biden's swearing in, a violent mob of pro-Trump supporters stormed the U.S. Capitol, leaving the nation raddled and Biden's predecessor, President Donald Trump, impeached for the second time.

Prior to the riot, the Biden transition team said Inauguration Day events would be scaled back due to the ongoing coronavirus pandemic.