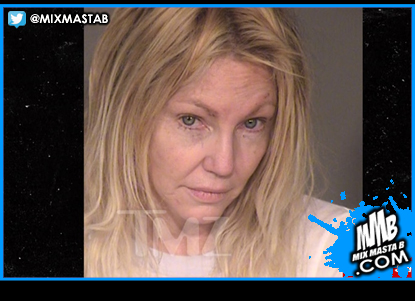 9:34 AM PT -- A source close to Heather tells us the 56-year-old was agitated during the day, so her parents went over to her home. We're told that's when Locklear got violent, choking her mother and hitting her father. Her mother called the police.
Heather Locklear was taken to a hospital for a psych evaluation after a family member claimed the actress was threatening to kill herself ... TMZ has learned.
Law enforcement sources tell us a family member called 911 Sunday afternoon to report they were concerned for Heather. We're told both the Ventura County Fire and Sheriff's Departments responded to Locklear's home.


According to the dispatch audio, the caller claimed Heather was acting erratically and threatening to hurt herself ... the caller said Heather was trying to find a gun to shoot herself.

Locklear was then transported to a hospital -- we're told the incident was only medical, nothing criminal.
TMZ broke the story ... Heather was arrested back in February for felony domestic violence against her boyfriend. During the arrest, Locklear allegedly threatened to shoot officers if they ever returned to her home.
We're told, given the recent history, the Sheriff's Department sent multiple units Sunday to handle any possible threat.
Posted by Mix Masta B at Monday, June 18, 2018