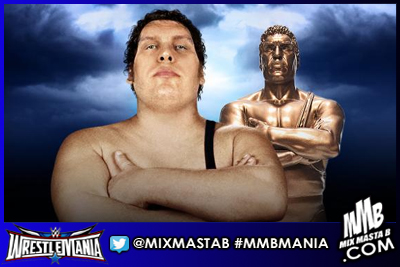 One of WrestleMania’s fastest-growing traditions will return on April 3 when a legion of Superstars collide in the 3rd Annual Andre the Giant Memorial Battle Royal.

Introduced in 2014, the over-the-top-rope Battle Royal honors the incomparable WWE Hall of Famer. Known as The Eighth Wonder of the World, the 7-foot-4, 520-pound Andre, who passed away in 1993, was considered the “King of the Battle Royal” in his heyday.

Though no Superstars have yet been confirmed for the 2016 edition, participants will no doubt reveal themselves as WrestleMania nears.
The rules of the contest are simple: All participants start in the ring at the same time, and the only way to be eliminated is to be thrown over the top rope, with both feet touching the floor. The melee continues until just one man is standing. The winner will earn not only the distinction of being the event’s third victor, but also a statue bearing Andre’s likeness.
Who will join the ranks of past winners Cesaro (2014) and Big Show (2015)? Which Superstars will risk life and limb to compete in the lawless fray? Stay tuned to WWE.com for updates as they become available, and don’t miss WrestleMania when it airs live on WWE Network on Sunday, April 3, at 7 p.m. ET/4 p.m. PT.
Posted by Mix Masta B at Wednesday, March 16, 2016