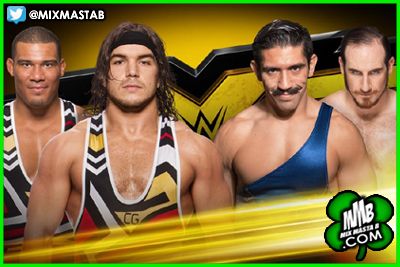 Two of NXT’s top tag teams collide tonight with an NXT Tag Team Title Match hanging in the balance, as American Alpha clashes with The Vaudevillains in a No. 1 Contenders’ Match.
Aiden English & Simon Gotch have turned over a new leaf in recent weeks, with the former NXT Tag Team Champions ditching their upbeat, spirited attitude for a scowling, vicious aggression. It has brought The Vaudevillains success of late, as the ruthless duo knocked off The Hype Bros in tag team competition.


However, The Vaudevillains’ road to a championship match must go through the red-hot American Alpha. Jason Jordan & Chad Gablehave gone on a tear in the tag team division, defeating some of NXT’s most decorated tandems, including Blake & Murphy and the longest-reigning Tag Team Champions in NXT history, The Ascension. In fact, it was after a loss to American Alpha last December that English & Gotch started to rediscover their ruthless roots.
Will The Vaudevillains’ hardnosed aggression get them another championship opportunity, or will American Alpha prove that they’re worthy of challenging NXT’s top dogs? Find out tonight at 8/7 C, only on WWE Network!
Posted by Mix Masta B at Wednesday, March 16, 2016