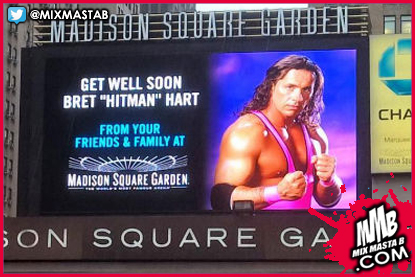 The announcement earlier this week that WWE Hall of Famer Bret Hart is currently suffering from prostate cancer stunned both wrestling fans and those in the wrestling business. Now, one of the places where Hart achieved some of his greatest successes is paying him tribute.
Madison Square Garden in New York City was the site of some of Hart’s greatest triumphs during his wrestling career. When one thinks of Hart and MSG, his victory over “Mr. Perfect” Curt Hennig at SummerSlam 1991 immediately comes to mind. In that match, Hart won his first singles title in the WWE, the Intercontinental Championship. Two and a half years later, at WrestleMania X, Hart captured the WWE Championship for the second time when he defeated Yokozuna for the strap in the show’s main event at MSG.
On Wednesday of this week, the venue honored Hart on their world famous marquee with an image of the Hitman, as well as a get well message.
Posted by Mix Masta B at Thursday, February 04, 2016