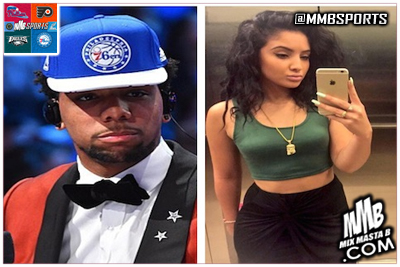 NBA rookie Jahlil Okafor claims he’s been targeted by an Internet “troll”, who is spreading disgusting lies about a sexual encounter that never happened and now he’s taking action to shut her down.
Social media exploded over the past 24 hours after someone claiming to be a woman named “Chanel” went to Twitter and posted a story about hooking up with Okafor, complete with embarrassing details involving his junk and bedroom performance.


But Okafor’s camp tells TMZ Sports the story is “absolutely false” adding, Jahlil has never met the person and has no idea who she is.
Team Okafor has reportedly already contacted Twitter to get “Chanel” to take down the tweets. Okafor’s team was told the tweets fall under Twitter’s abuse policy, especially posts where she threatens to leak nude pics and if she doesn’t delete them, her account will be suspended.
*update* Her account has since been suspended.
Okafor’s camp says they have already kicked the matter over to their legal counsel and are considering their legal options moving forward.
Posted by Mix Masta B at Thursday, July 02, 2015