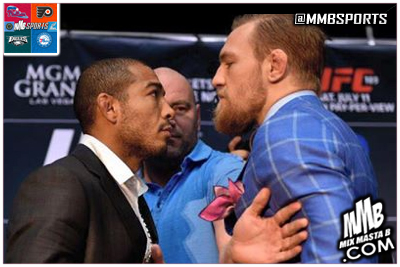 UFC featherweight champion Jose Aldo has withdrawn from a scheduled title defense against Conor McGregor at UFC 189 on July 11 in Las Vegas due to a rib injury.


Aldo (25-1) suffered the injury while training last week in Rio de Janeiro. The seven-time defending champion had attempted to recover in time to still compete on the pay-per-view card, but was ultimately forced to pull out.
"Aldo's rib is too painful and he will not be fighting," White said. "Chad Mendes will fight Conor McGregor for the interim belt. It's (Aldo's) decision. I don't feel great about it. We've spent a lot of money promoting this fight and a lot of people were excited. It's definitely disappointing."
Reports have conflicted regarding the severity of Aldo's injury. His coach, Andre Pederneiras, has stated Brazilian physicians have diagnosed a fractured rib. The UFC released a statement last week that Aldo suffered from a rib contusion and damaged cartilage.
McGregor, who fights out of Dublin but has spent the last eight weeks training in Las Vegas, said he couldn't force another man to fight him.
"If a man is scared for his life, we can not force him to step inside and fight me," McGregor said. "Doctors have cleared him to fight -- it's a bruise -- but he still pulled out. Rightfully so, the belt should be taken from him and we will contest for the interim belt or, in my opinion, the real belt."
The Irishman went on to predict a four-minute knockout over Mendes. McGregor is 5-0 in the UFC with four knockouts.
Mendes (17-2) is coming off a TKO victory over Ricardo Lamas in April. A former NCAA All American wrestler at Cal Poly, Mendes' only two professional losses have come against Aldo in UFC title fights.
"Of course, I think about fighting Conor all the time," said Mendes, when he was announced as the UFC's backup plan for Aldo last week. "Conor is a guy that has made a huge splash in the division. He's brought a lot of attention to the sport and to the division. This is a guy who has worked his way to the top and I knew, eventually, I was going to fight. That time is now."
CREDIT / SOURCE - ESPN
Posted by Mix Masta B at Tuesday, June 30, 2015