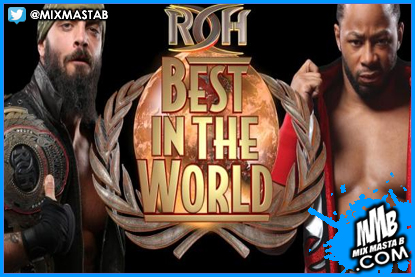 If you missed it Friday night now you can see it for the first time or relive the magic that was Ring Of Honor's Best In The World PPV. Order it tonight on PPV.
MAIN EVENT

You will not want to miss out on the historic first time ever in Ring of Honor that both World Championships have been on the line as ROH World Champion Jay Briscoe faces off against ROH World Television Champion Jay Lethal w/Truth Martini. Briscoe has not been pinned in over 2 years. Lethal is the longest reigning Television Champion in history. Lethal believes he is the only true Champion in ROH and Briscoe wants him to ‘Man Up’ and prove it! The biggest match in ROH history is upon us and you do not want to miss out on your chance to witness history!

For months, a mysterious group of masked individuals stalked Ring of Honor.  Proclaiming themselves the Knights of the Rising Dawn, they mingled into the crowd and sent bizarre clips of video manifesto.  The Addiction would secure a shot at the ROH World Tag Team Championships and reveal during the match alongside Chris Sabin that they were,  in fact,  behind the KDR! A stunned Kyle O’Reilly would succumb to a shot to the head with a championship belt. He would wake up and realize that reDRagon were no longer tag team champions. The Addiction have tried as hard as they can to avoid reDRagon and stated they would only get one more chance at the championships. Fish & O'Reilly are coming to NYC with vengeance on their minds. With No Disqualifications the edge goes to reDRagon! Could we see them win the championship for a 4th time? Or can The Addiction get rid of reDRagon as challengers once and for all?

These three men will face off for the right to become #1 contender to the ROH World Championship. All 3 are worthy, but there can only be one true #1 contender. Three of the very best today, with different paths but similar goals, will collide with an opportunity at the most important prize in professional wrestling hanging in the balance. Who will walk out with a chance to face the ROH World Championship? Who wants it?

There is a well documented history between The Kingdom & The Bullett Club that goes beyond the boundaries of ROH and into New Japane Pro Wrestling. “The Phenomanl” AJ Styles and The Young Bucks are coming to Best in The World ’15 not just to beat The Kingdom but to embarrass them! The braggadocios trio want to show that they are more than flash and championships! They are coming to prove that the Bullet Club is the best group in professional wrestling! Maria Kanellis will have Adam Cole, Matt Taven & Michael Bennett ready to do battle! The intensity and action that this will bring should give you goose bumps and provide visions of spectacular wrestling. You will not want to miss the two hottest groups in professional wrestling squaring off at Best in The World ’15: Battle of The Belts.

When Jay Lethal and Truth Martini’s House of Truth declared that they wanted Jay Briscoe’s ROH World Championship, Mark Briscoe knew there would be trouble. Never one to back down from fight, especially involving his brother, Mark is now involved in a war with the House of Truth that will bring him face to face with the impressive Donovan Dijak! Is Dijak ready for the war that Mark Briscoe is going to bring? Is Briscoe ready for the physical tools of Dijak and the war games planned by Truth Martini? Will O.D.B make a difference for Briscoe? What role will J. Diesel play in this?

In just a short time together as a team, ACH and Matt Sydal have already solidified themselves as one of the most exciting duos in all of professional wrestling.  Recently ACH has found himself targeted by The Decade, specifically the increasingly aggressive Adam Page. Many have speculated that Page is envious of ACH's success.  Meanwhile, Page and BJ Whitmer claim that ACH has done nothing but waste opportunities he didn't deserve in the first place. The Decade squares off against ACH & Matt Sydal with some heavy issues at hand! The hostilities between these teams are only getting more and more heated.  They both obviously want to be contenders in the tag title scene.  But right now their personal issues are squarely at the forefront...and they will boil over at Best in The World ’15!

The team of Hanson and Ray Rowe are without question the most physically dominant force in Ring of Honor today.  They were not around when Caprice and Cedric made their previous run as a unit, but these two teams are no doubt studying each other's strategy in preparation for this huge match on pay-per-view.  This is sure to be a classic battle of speed versus size and of agility versus power.  Cedric may have broken his losing streak recently by defeating Moose, but there's no way a man of integrity like Caprice Coleman will allow him to take that sort of shortcut on this Friday.  Can Caprice keep his partner focused on the task at hand? If these two can't function as the unit the once were, the unstoppable force that is WAR MACHINE will roll right through them LIVE on pay-per-view!

The "24/7 Party" Dalton Castle is making his debut in the big apple at Best in The World '15: Battle of The Belts and he would want it no other way! The bright lights and the fast paced living is what he is all about. Silas Young on the other hand is coming to ruin this debut. Silas is known a no-nonsense athlete that brings a hard hitting diverse style that could pose many problems for Castle. Young is coming to win, plain and simple. No frills, no excuses, he is just there to destroy Castle. This match will be unique in many ways. Is Castle ready for "The Last Real Man"? Is Silas ready for the "24/7 Party"? You will want to be watching to find out!

BEST IN THE WORLD '15
LIVE ON PAY PER VIEW

If you can not be in attendance, you will have multiple options to watch Best in The World ’15: Battle of The Belts live! You can order this event on various platforms for $34.95!

You can see it on live Pay Per View through all major cable & satellite companies, For a list of providers, click HERE

You can order it on www.rohwrestling.com

New to Flipps? Jay Lethal explains how easy it is to use https://youtu.be/3DDKQs2-rGo

DO NOT FORGET ROH ALSO RETURNS TO TERMINAL 5 THE VERY NEXT NIGHT!!

“THE 24/7 PARTY” DALTON CASTLE vs WATANABE

PLUS ALL THE STARS OF RING OF HONOR!

YOU WILL WANT TO BE THERE LIVE TO SAY GOODBYE TO AN ROH LEGEND ALONGSIDE ALL YOUR FAVORITE RING OF HONOR STARS!

To get your tickets before they sell out, click HERE!
Posted by Mix Masta B at Sunday, June 21, 2015