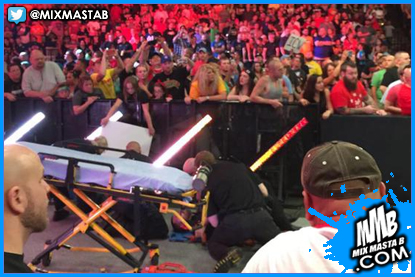 Critics of wrestling are more than quick to say nothing is real about it but one superstar's injury at the recent Raw event was legit.

During the main event, Seth Rollins called out Jamie Noble, Kane and Joey Mercury so he could apologise to them for something. It looked like the members of The Authority were set to be reunited. Enter Brock Lesnar to try and ruin it all.  He entered the ring to take out each and every one of them. However, during the brawl, he ended up throwing Noble into the audience barriers, which ended up having more than the intended effect.

When members of The Authority returned to the ring to turn the tables on Lesnar, Noble was missing. He wasn't able to get up and the cameras made sure to keep off him while he received treatment.

Turns out that Noble suffered three broken ribs and struggled to breathe. He was stretchered out of the arena and taken to a nearby hospital. He later tweeted to confirm his serious injuries and thanked fans for their support.

I would like to thank WWE staff and all the fans for nice messages. I have 3 broke ribs. Couldn't breathe at first.
— Jamie Noble (@WWENoble) June 23, 2015


Thankfully Noble didn't suffer any career ending injuries. But now we know that wrestling can get very real.