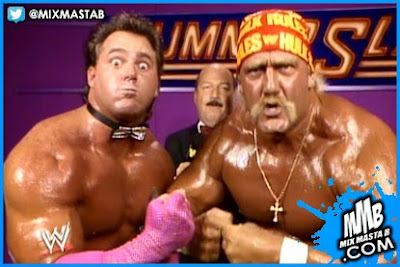 It looks like Hulk Hogan's longtime friend Brutus "The Barber" Beefcake (Ed Leslie) has been selling unauthorized photos of The Hulkster.

Hogan posted a photo of the two on Twitter this weekend with the caption, "Back in the day when it was straight up brother." A fan replied, saying he met Leslie back in March at a signing and Leslie was selling 8x10 photos of Hogan. Hogan told the fan he never signed any 8x10 photos or gave them to Leslie to sell. Hogan told another Twitter user that this was a "shoot" and he was not working the fans. Below are the tweets:

Back in the day when it was straight up brother. HH pic.twitter.com/cpVELIXNdk
— Hulk Hogan (@HulkHogan) May 3, 2015

Sorry brother JJ that's not my signature,see me on the WWE road,ComicCon or Hogans Beach Shop for my real signature HH
— Hulk Hogan (@HulkHogan) May 4, 2015

I'm sorry,I'm embarrassed but I have never signed pictures for Brutus to sell, I'm sorry. HH
— Hulk Hogan (@HulkHogan) May 3, 2015