Rihanna Posts Topless Photo of TLC After They Chastise Her Nudity 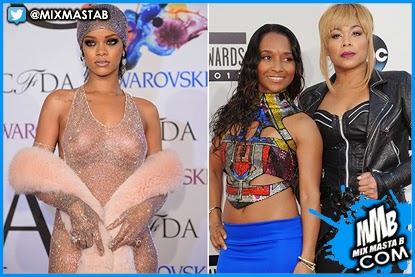 Rihanna found a clever way to respond to the surviving members of TLC's complaints about her frequent nudity: She posted a picture from the Nineties of them naked to her Twitter header.
Previously, TLC's Chilli and T-Boz had appeared on Sunrise Australia and commented on Rihanna's revealing dress (which made Rolling Stone's "Everything Index") at the Council of Fashion Designers of America awards earlier this week. "Every time I see you, you don't have to be naked," T-Boz said. "And it's hard for us to say anything 'cause anytime we say something, it's, 'TLC, oh they must be jealous!' First of all, let me say this. It is what it is. I call a spade a spade, OK?"
But it's where T-Boz took her argument that caught Rihanna's attention. "We sold and became the biggest girl selling group of all time, with our clothes on," T-Boz said. "That says a lot. It's easy to sell sex. We can go around with boobie cakes out all day long."
"They're small," Chilli added. "We don't have a lot." T-Boz rejoined, "But they're still boobie cakes."
After that, Rihanna dug up a photo that showed all three members of TLC – with T-Boz and Chilli both topless, covering their breasts with their hands. She also tweeted out a picture of herself with her tongue out and a caption that read, "When there's no changing the fact that I'm me, and they're well. . . they're them."
CREDIT / SOURCE - KORY GROW - Rolling stone magazine
Posted by Mix Masta B at Tuesday, June 10, 2014