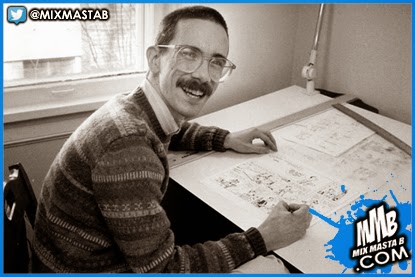 Nearly two decades after the final strip of Calvin and Hobbes marked creator Bill Watterson's retirement, the beloved cartoonist made a secret return to the newspaper comics page. Stephan Pastis, the cartoonist behind the syndicated strip Pearls Before Swine, revealed on Saturday that Watterson had collaborated with him on several Pearls installments that were published over the past week.

Pastis explained in his blog that the collaboration was sparked by a strip he published last year in which he mocked his own drawing abilities with a joke about picking up women by pretending to be the Calvin and Hobbes creator. He sent the strip to the famously reclusive Watterson, who, to Pastis' utter shock, responded with a proposal to collaborate.
Watterson suggested a plotline in which the Pearls cartoonist is hit on the head and is suddenly gifted with improved artistic skills, with Watterson taking over drawing the strip for a few days. After some back and forth, the idea was adjusted to have a precocious second-grader named Libby take over the comic after criticizing Pastis' work. You can see the resulting panels here, here and here.
Watterson asked Pastis that he not reveal the collaboration until after the strips had run, and Pastis complied. "It was the hardest secret I’ve ever had to keep," Pastis wrote in his blog. "Because I knew I had seen something rare. A glimpse of Bigfoot."
As Watterson explained to the Washington Post, he had conceived the collaboration as a way to raise money for Team Cul de Sac, a charity raising funds to fight Parkinson's that was co-founded by Cul de Sac cartoonist Richard Thompson, who suffers from the disease. The original Pearls strips with Watterson's work will be on display at the Heroes Convention in Charlotte, North Carolina from June 20th through 22nd before going up for auction for Team Cul de Sac. "It was generous of Stephan to let me hijack his creation, and more generous still to donate the originals," Watterson said.
Last February, the news came out that Watterson had submitted his first illustration for publication in 19 years with the poster for Stripped, a documentary on cartooning.
CREDIT / SOURCE -MIRIAM COLEMAN / Rolling stone magazine
Posted by Mix Masta B at Tuesday, June 10, 2014