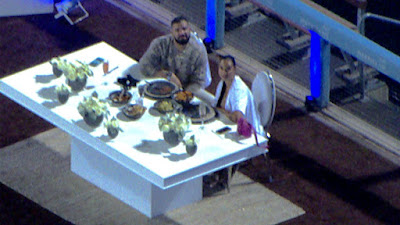 Is it even a real date if he doesn't rent out an entire baseball stadium?

Drake was pictured seemingly enjoying a date night on Thursday (July 8) with Johanna Leia, mother of high school basketball star Amari Bailey, E! Online reports. What set this date apart, however, was the location. The Champagne Papi himself rented out Dodger Stadium for a cozy meal on the empty field.

"We can confirm that Drake made a sizable donation to the Los Angeles Dodgers Foundation in order to make his Dodger Stadium dinner date a reality," a rep for the MLB team confirmed to E!.

A helicopter reporter for ABC7 was flying overhead when he happened to look down and catch the "God's Plan" rapper enjoying a private dinner date on the side of the field.

"[Drake] ON A DATE?" Chris Cristi wrote on Twitter, alongside a couple photos taken from high in the sky. "Randomly just flew over this cozy couple enjoying a private dinner along the third base line at an empty Dodger Stadium."

Drake is good friends with LeBron James, whose son is on the same high school basketball team with Bailey, so it was no surprise when he showed up to some of his games. However, rumors of love between Drake and Leia began circulating since he began appearing at games with James, HipHopDX reports.

This isn't the first time Drake has shelled out for an empty stadium. Earlier this year, he rented out the 70,000-capacity SoFi Stadium in Inglewood to celebrate winning Artist of the Decade at the Billboard Music Awards, per Variety, hosting a star-studded dinner party right on the 50-yard line.