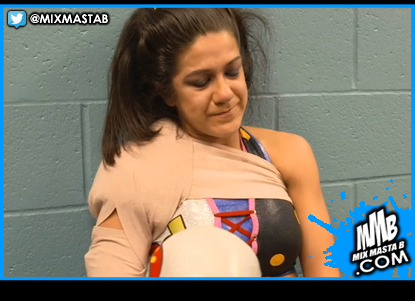 During her match with Nia Jax on the July 31 edition of Raw, Bayley suffered an injury to her right shoulder.
The former Raw Women's Champion was evaluated by medical personnel, but the official diagnosis was inconclusive due to the amount of swelling involved. Bayley has been told to rest the shoulder until next Monday, at which point doctors are hopeful that the swelling will have sufficiently gone down so that she may be reevaluated and a firm verdict can be reached.


"Everything just tensed up around it,” Bayley told WWE.com shortly after her match on Monday night. “I've never had an injury like this before, so I can't really know what it is. I guess we're gonna see."
Dr. Chris Amann told WWE.com, “We’ve determined the injury is shoulder-related, and she will be going under further diagnostic testing later this week to determine the extent of the injury and also establish a timetable for recovery.”
Posted by Mix Masta B at Thursday, August 03, 2017