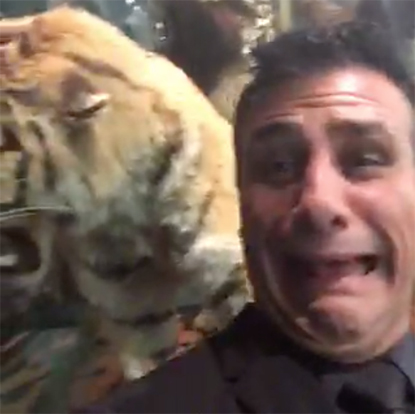 Former WWE superstar Alberto Del Rio is on periscope, and his videos with fiancee and current WWE superstar Paige are turning into the sort of can’t-miss television that professional wrestling used to be famous for during the Attitude Era.
In his latest video, after getting off to a rambling start and having a disagreement with Paige over who “wears the pants” in their relationship, Del Rio promised that he was going to entertain fans.
“Just tell me if this is not entertaining,” Del Rio asks his viewers before turning the camera to show a life sized stuffed tiger in a glass window. “I’m here, and we have a tiger. A ****ing tiger.”


Hearing the adult language, Paige asked Del Rio if his video was not rated PG.
“Oh no, you work for that company that is PG. I don’t work for that ****ing company anymore. Thank god,” Del Rio proclaimed, adding, as Paige tried to cover his mouth with her hand. “Changing the subject, I know it was you, mother***ker, I know you did this to me, to my baby. But I’m gonna prove it was you, piece of ****.”
“You know, she is better than you,” Del Rio said, referring to his current or soon-to-be wife, who was the subject of leaked sex tapes and images last month, before offering, “So you can suck my big–”
At that point, Paige cut him off, so Del Rio showed more footage of the stuffed tiger.
“This is the reason why I feel embarrassed sometimes with this woman because she loves to do stupid **** all the time” Del Rio continued. “The world used to think that she was the one always serious and never doing anything crazy.”
“I’m actually the normal one,” Paige clarified. The two had a brief argument, in which Del Rio claimed that he had “come out of the closet” in terms of revealing his true entertaining personality since leaving WWE.
“I used to work in that other place where I was angry all the time, hating people all the time, because most of the people working in that place are a bunch of *****s” Del Rio went on, referring to a certain part of a woman’s anatomy or an endearing term for a cat.
“Especially one with a big nose like that,” he elaborated, mimicking a big nose with his fingers. “But that’s a different story for a different day.”
In an earlier video released on Periscope, Del Rio made similar comments about a big nozed WWE boss, saying, “You remind me of one of the bosses in the WWE with a big ****ing nose. Just a big ****ing p****.” WWE executive Triple H is famous for having a prominent schnoz.
This isn’t the first time Del Rio has brought his beef with former employers to social media. In a message to fans on Instagram two weeks ago, during which Del Rio also announced he would wed Paige on March 29, even though a periscope video recorded later claimed they will be married in June, Del Rio wrote:

It looks like Alberto Del Rio’s periscope account will be a must-follow for the foreseeable future. In the meantime, check out the most recent video while it’s still available here.
Posted by Mix Masta B at Sunday, April 09, 2017