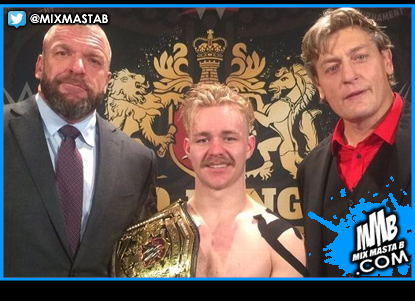 BLACKPOOL, England -- Ask most wrestlers on the British independent scene and, if they are honest, they will tell you Pete Dunne is in a league of his own.
Not just in terms of his "British Strong Style" in-ring work, which is indeed impressive, but in the intensity and natural confidence that pours out of him.
The 23-year-old from Birmingham -- an 11-year veteran who spent three months in a remote Japanese dojo at 17 to hone his craft -- looked set to live up to his billing as the favorite for the WWE United Kingdom championship tournament.


But, in what was a shocking move, Dunne was defeated by Tyler Bate in Sunday's final, as the WWE decided to place its inaugural UK championship belt around the waist of the 19-year-old.
After the confetti had fallen, and WWE executive Paul "Triple H" Levesque handed Bate his title in the middle of the ring with WWE superstar Finn Balor alongside him, Bate joked that "this is going to take a while to clean up."
The Empress Ballroom showered Bate with chants of "you deserve you it." But the native of Dudley responded by saying, "The people who deserve it are you, the people who support British wrestling."
As he stood in the ring during his winner's speech, Bate credited the support of his parents.
"Thank you for driving me up and down the country," he said. Bate's family sat in the crowd a few rows back from the ring, living every emotion with him, and there were tears in Bate's eyes as he lifted the title above his head.
Backstage, in a media scrum, Bate posed for photos with WWE's head talent scout William Regal along with Levesque.
"Nineteen years old, does anybody think this kid's not the future?" said Levesque. "It's a big responsibility. Congratulations. I look forward to working with you a lot."
Levesque shook Bate's hand before quickly darting for the exit. As he departed, Levesque joked, "I've got to be at Raw in a few minutes."
While Levesque will fly back to the United States for WWE's flagship Monday night television show, Bate stayed and expressed his desire to defend his newly won title all over the UK and Ireland.
"It's ridiculous to think this time last year I was wrestling in sports halls, and now I'm a WWE champion," he said. "I feel like I'm ready for it."
Perhaps Bate's victory was not such a surprise, given it put a feel-good stamp on the end of the proceedings, in similar fashion to TJ Perkins' victory in last summer's WWE Cruiserweight Classic.
Bate is a charming, charismatic, standout young performer who captivates British crowds, and showed he is one of the brightest talents in the game. He beat Ireland's Jordan Devlin and Scotland's Wolfgang -- the Insane Championship Wrestling heavyweight champion -- to reach the final, where he and Dunne put on an entertaining bout.
It was Wolfgang who had earlier denied the Empress Ballroom what many had considered to be a dream final, when he beat Dunne's "British Strong Style" stablemate Trent Seven in the quarterfinals. Fans seated in the balcony with a sign reading "We're havin' a party when Wolfie wins!" were ultimately disappointed.
Dunne, the current PROGRESS Wrestling world champion, was the standout of the British scene in 2016 and his stock continues to soar inside the squared circle, despite his not coming away with the WWE title.
Known as "The Bruiserweight," Dunne could perhaps be seen as the biggest beneficiary of the whole tournament. He took part in a memorable angle at the close of Saturday's first-round show when he threw Blackpool's Sam Gradwell off the stage, and continued to show off his heelish persona when he attacked Bate before Sunday's final, propelling himself into an intriguing storyline that saw him involved in a backstage confrontation with Regal.
A taped-up Gradwell was dispatched early on Sunday evening before Dunne emerged victorious in what proved to be the match of the tournament, seeing off best friend Mark Andrews, a man he spent 10 weeks touring independent promotions in the United States with in 2010.
Andrews, the Welshman whose contract with Total Nonstop Action expired on Jan. 1, brought some star power to the 16-man tournament at the Empress Ballroom, and made himself a star in WWE over just two nights with three impressive, high-flying showings that roused the crowd.
"I want to thank this talent," said Levesque. "You go through and you make a selection process and you choose talent. I can tell you without a shadow of a doubt we picked the correct talent. They knocked it out of the park. I can't tell you how proud I am of them and the performances they put on.
"I said at the beginning, 'If you wanna build an empire...' -- we just built an empire."
CREDIT // SOURCE - Nic Atkin // ESPN UK
Posted by Mix Masta B at Sunday, January 15, 2017