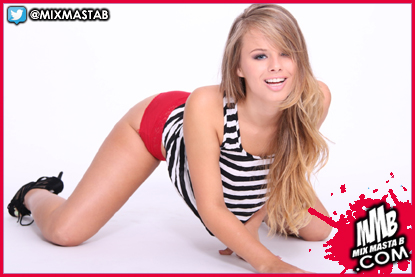 “The scene was one of my personal favorites over the last year,” said Jillian. “So, I am very glad that it was recognized with an AVN Award. I had a lot of fun shooting the scene and my co-stars were awesome.”
Eye Contact from Jules Jordan Video is currently available from adult retailers.
Jillian was recognized by CNBC in their annual “Dirty Dozen” piece. The article reviews the biggest stars of the last year. With an incredible body of work, such as her star showcase Just Jillian, the hardcore hottie easily made the list. The article mentions Jillian's porn beginnings and notes how she has carved a niche for herself. “I was pleasantly surprised when I saw I was on the list,” said Jillian. “There are a lot of people on there that I admire, so to be among them is incredibly thrilling.” The CNBC article  “The Dirty Dozen: Porn's Biggest Stars”can be found here: http://bit.ly/JillianJansonCNBC.
An incredible year for Jillian culminates with her first AVN Award trophy! For the ultra sexy scene in Jules Jordan Video’s Eye Contact, the brunette beauty wins Best POV Sex Scene!