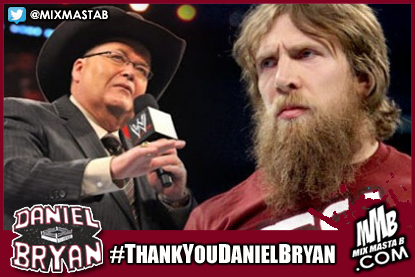 Jim Ross took to his blog to talk about the news of Daniel Bryan retiring. Below is what he had to say.
Greetings all! Thanks for stopping by our site. Tuesday night at 9 ET/6 Pacific a new, Ross Report Show will drop at podcastone.com and iTunes plus here on the homepage of our site with one of our favorite and most popular guests, Sean 'X-Pac' Waltman. We anwser many of your questions and discuss WWE's Road to Wrestlemania. among many topics.


The big news of the day Monday surrounds a tweet sent out by @WWEDanielBryan who announced his retirement from in ring competition for WWE due to a dangerous condition having to do with the talented grappler sustaining multiple concussions. While some fans. who are obviously uneducated as to the severity that multiple concussions can have on an individual, have railed on WWE for not clearing Daniel and some fans have even accused WWE of having a conspiracy to not allow DB to step back in the ring which in itself rings of ignorance and is actually embarrassing for those that actually feel that way.
During my tenure as EVP of Talent Relations in WWE, dealing with injuries was a ongoing occurrence in my office. How those matters were handed  continued to be refined over the years all the while keeping the talent's health in mind as always being our number one priority. When a decision to return someone to the ring who had been away for injury issues, those decisions had to be made carefully and always erring on the side of caution each and every time out. In essence, we had to do our best to often times protect the talents from themselves.
At the same time, unfortunately, some talents have been known to 'milk' an injury to be able to sit home and collect a pay check.
In Daniel Bryan's case, that latter issue was never in question as he's a man of integrity and professionalism who would never attempt to work the system.  Having said that, I feel that WWE would be best served here to keep Bryan Danielson on the staff and put him in a position to help young talents adjust to life in the WWE not only from an in ring standpoint but from life away from the ring as well.
No company can ever have enough people the quality of Bryan Danielson helping develop their brand and, most importantly, their young talents who I feel will respond in a big way to the coaching of one of the great overachievers ever in the business.
From what I understand, the WWE was informed of DB's decision after they arrived in Seattle today where Monday Night Raw will emanate on the USA Network.
Although it is a sad day for Bryan and his fans with him not being able to safely wrestle in the future, I'd say that the 'YES!! Man' came out of this ordeal a very lucky man.
I don't know of another wresting company that protects their athletes as thoroughly as WWE does their talents. Thank goodness that WWE did do all the extensive testing on Bryan's injury and that they did not bend to the pressures of the talent or his fans to return hm to the ring. If DB had been wrestling for another company, any company, would he have received the care that he needed to determine the actual severity of the concussion issue?
In the proverbial, 'good old days' the concussion issue would have been largely ignored and the talent would have been returned to the ring as quickly as possible.
At the end of the day, Daniel Bryan is blessed to be wrestling in today's marketplace and specifically for WWE where he has received amazing, medical care from a battery of specialists who certainly don't work cheap but who likely have intervened to help ensure that the athlete who overcame numerous odds to become a star in WWE can live a productive life as a husband, father and son.
There are a litany of ways that Bryan Danielson can help the business that he loves to grow and better navigate the talent's future.
Perhaps in some crazy way, the sting of 'retirement' will fade once Daniel Bryan aka Bryan Danielson begins the next, exciting chapter of his career in WWE.
Thanks for stopping by and I will post another blog Tuesday to follow up on this matter and other developments on RAW and the news of a new opportunity that we are exploring. Stay tuned.
Boomer Sooner!
J.R.   @JRsBBQ
Posted by Mix Masta B at Monday, February 08, 2016