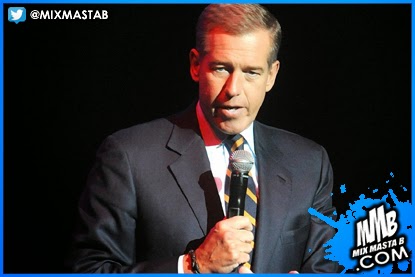 As the fall out from the Brian Williams scandal continues, ABC's World News Tonight with David Muirhas finally overtake NBC's Nightly News in the ratings for the first time in over seven years.

Williams remains on a leave of absence after he falsely reported that he was under fire during the invasion of Iraq in 2003. Now a Vanity Fair investigation goes deep into what allegedly happened at NBC after their beloved news anchor's credibility was ruined.
These are the down the 8 most shocking claims surrounding the fall of Williams from the piece.
WATCH: What's Next for Brian Williams?
1. Some believe "he was deeply insecure."
Williams was not a foreign or a war correspondent, which caused him to place more focus on the way he reported stories, often putting himself at the center of the action. Those who argue that he was insecure "suggest that his storied broadcasts from New Orleans in the aftermath of Hurricane Katrina, which proved a boon to his ratings, were in part an effort to overcome the perception that he was a journalistic lightweight."
2. Everything changed After Tim Russert passed away in 2008.
A former NBC correspondent says that Russert's passing totally changed the direction of NBC News. "Tim was our soul, our conscience," this insider says. "When Tim died, and Brian pushed out John Reiss [former executive producer of the Nightly News], there was no one who could influence Brian in a significant way, who could say, 'Goddammit, Brian, you have to do this.'"
3. The 51st floor executive dining room was a favorite for yelling at people.
"If Brian could've eaten there eight days a week, he would've," a onetime NBC executive said. As several big wigs would also dine there, Williams would allegedly put on a show for NBC execs. "He would hold court at some table, with some poor mid-level schmo who didn't know what was going on," a onetime exec says. "And he would make a point of taking someone down a notch."
4. Williams loved entertainment and late night shows...maybe too much?
No stranger to 30 Rock and Jimmy Fallon, a former NBC executive said about Williams, "He goes on Tina Fey and Jimmy Fallon and all that, that's where his heart was, and [at NBC] that's seen as running away from the news division."
WATCH: Brian Williams Covers Snoop Dogg on 'Tonight Show'
5. His wife stood by his side.
After his lie was uncovered, an insider recalls how Williams' wife attempted to explain what may have happened to her husband. "You talked to Brian, and he said, 'I slept two nights under the wing of that helicopter, looking up through the hole in the wing [from the rocket fire]. There was a sandstorm, and somehow, in the process, he said, he must have come to believe he had been on the helicopter. Later, his wife [Jane] tried to explain. She said he put things in boxes [in his mind]. He would only talk about what was in those boxes on-camera."
NEWS: Brian Williams Suspended from 'Nightly News'
6. Williams did not expect a 6-month suspension.
"At that moment Brian assumed he was coming back in a week, four days-something," a person at the crisis meeting said. When they gave him a 6-month suspension and announced it on Feb. 10, Williams was reportedly told, "This is what we're going to do, and we're not going to discuss it. If you want to come back, this is what it will take." And after it was all said and done, a friend of Williams claimed that he said, "chalk one up for Brokaw." Tom Brokaw anchored NBC'sNightly News for 22 years before Williams took over in 2004.
While it remains to be seen what will happen when the suspension ends in August, Lestor Holt will continue to serve as anchor on the Nightly News. There are already rumors about Williams replacing Larry King on CNN.
To read the full Vanity Fair piece, click here.