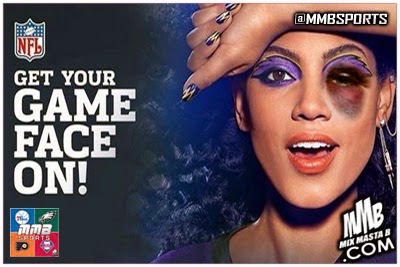 The NFL’s bungled response to the controversy surrounding domestic abuser Ray Rice has resulted in more than just a small headache for commissioner Roger Goodell, for the league itself and for its sponsors. Over the weekend, the women’s rights advocacy organization UltraVioletannounced plans to fly planes over several NFL stadiums with banners reading “#GoodellMustGo,” while the hashtag calling for the commissioner’s dismissal dominated social media. The online protest was accompanied by a graphic image of an NFL CoverGirl Photoshopped to portray her as a victim of domestic violence, in an effort to urge the brand to withdraw its support from the league.


The image, first circulated by journalist Adele Stan, came from a series of advertisements CoverGirl released as part of its partnership with the NFL, showing different makeup looks inspired by each of the league’s teams — including Rice’s Baltimore Ravens. Security footage of the player knocking his partner unconscious resulted in his suspension from the NFL last week, and has since highlighted the precarious partnership of a beauty company with a football organization that has condoned domestic violence for years. The role that both makeup brands and NFL officials have played in covering up intimate partner violence hasn’t been lost on many since the storm of social media protest.
As Jezebel discovered, the page of CoverGirl’s website devoted to its NFL partnership is “currently under maintenance,” which could indicate that the brand is rethinking its sponsorship. As of last Wednesday, however, the brand’s NFL campaign was still in effect.
CREDIT / SOURCE - Jenny Kutner / Salon