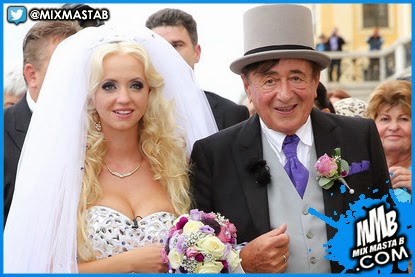 Age is just a number, right?
Over the weekend, Austrian billionaire Richard Lugner, 81, married 24-year-old German Playboy model Cathy Schmitz, proving that not even a 57-year age difference can stand in the way of true love.


Lugner, who most recently made headlines for taking Kim Kardashian as his date to the annual Vienna Opera Ball back in February, and his blond bride said "I do" during a lavish ceremony in Vienna Saturday. Schmitz was all smiles as she arrived to the ceremony in her all-white wedding dress and long veil. After making it official, the lovebirds made their way through the streets of Vienna surrounded by friends, family and fans.
Schmitz later changed out of her wedding dress and put on a more festive gown that featured a purple skirt and a bejeweled corset that showed off her ample cleavage. Meanwhile, Lugner matched in a formal black, white and gray suit with a purple tie and flower boutonnière.
As for the expensive wedding details, Lugner and Schmitz reportedly had a horse drawn carriage led by four Lipizzan horses and white pigeons, which were released into the air. The ceremony, which was held at the Schonbrunn Palace, also had court ushers to serve guests with endless bottles of champagne.
Ahead of their big wedding, Schmitz reportedly told German media earlier this year, "We did not intend to fall in love. It just happened. Love knows no age."
CREDIT / SOURCE - E!