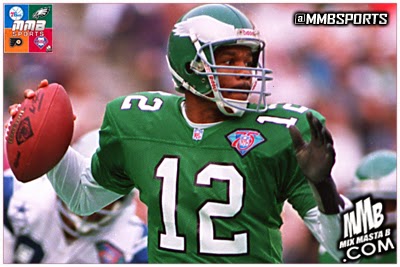 Philadelphia Eagles president Don Smolenski was a guest on the 94WIP Morning Show on Wednesday and spoke about something that doesn't get publicly addressed too often: the possibility of the Eagles switching their jerseys back to the beloved Kelly Green. Here's what Smolenski had to say via CBS Philly:


We have talked about it and there are some rules with the NFL that provides some restrictions that we’re trying to work through, but that’s going to take some time," Smolenski told Angelo Cataldi and the 94WIP Morning Show during an in-studio visit on Wednesday. "It’s there, and it’s something that we do talk about, but until some things change at the NFL level it’s going to provide restrictions for us. It is being talked about it, yes."

Hm. So that's far from anything concrete but it's at least interesting to see the uniform switch is something that's being "talked about." The main problem, as Smolenski notes, isn't necessarily on the team's end. As Tim McManus noted back in 2013 when Chip Kelly was hired, changing jerseys in the NFL isn't an easy process.

Changing uniforms in the NFL has become a lengthy and exhaustive process. According to the league offices, it essentially takes two years to make the switch once the request from the team is submitted. So if the Eagles today declared they wanted their primary uniforms to be Kelly Green, it wouldn’t actually come to pass until the 2015 season under the current policy.The NFL does a lot of homework before giving its stamp of approval. They exchange design ideas with the team; test the uniform on the field, inspecting how it looks from every seat in the stadium (both indoors and out, at night and during the day), and how it looks on camera; they want to see how it would appear in stores, and get player feedback.

Still, this needs to happen one day. Kelly Green is so much better than the Eagles current midnight green and, c'mon, the team's coach has the last name of Kelly. It's just too perfect.
CREDIT / SOURCE - Brandon Lee Gowton / SB Nation