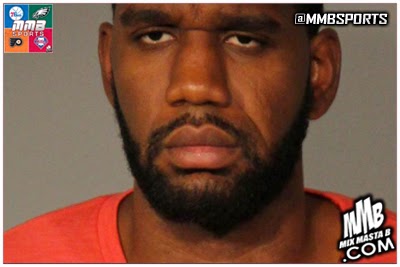 Lawrence Police, responding to a disturbance in the 7200 block of Maple Bluff Place, took Oden into custody around 5 a.m., after an officer observed "blood, swelling to the nose, lacerations to the forehead and nose area of the victim's face."

Oden reportedly told police he had dated the victim for two years, but that the couple had been broken up for about two months. He is quoted as saying: "Things got out of control and I started to go after the victim. My relative and witness tried to hold me back, but as I swung my arms to move them out of the way, [I] then punched the victim in the face. I was wrong and I know what has to happen."
The relative, who lives at the residence, reportedly told police she was awakened by Oden and the victim arguing, and claimed that "every time the two visit and go out, there is an argument to
follow."

Per WTHR, Gary Woodruff of the Lawrence Police Department said Oden fully understood what was going on and the ramifications of it.

"He was cooperative with our officers at the scene," Woodruff was quoted. "Sometimes making an arrest is the best resource, sometimes it's not. But in this case, the officers felt making an arrest based on the probable cause was the best course of action."

Oden, the No. 1 overall pick in the 2007 NBA Draft, inked a one-year deal with the Heat before last season, but played just 212 total minutes over 23 games in 2013-14, averaging 2.9 points and 2.3 rebounds. He remains unsigned for next season, though the Los Angeles Clippers were reportedly planning to bring him in for a workout this week.