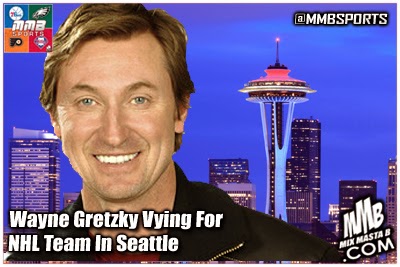 Wayne Gretzky has joined a group of investors hoping to bring a National Hockey League team to Seattle, The Post has learned.
The Gretzky group is one of three looking to bring an NHL franchise to the home of Starbucks, sources said — but each faces an uphill battle in that league Commissioner Gary Bettman has not said the league is ready to expand.


It is not known if the Gretzky group or either of the other two groups are eyeing an expansion team or hope to move an existing team to the Pacific Northwest.
A move to buy a Seattle team would mark at least the second time the 53-year-old Hall of Famer tried to become an NHL owner.
In 2011, Gretzky partnered with Providence Equity Partners, a New York private-equity firm, in a $1.5 billion bid for Maple Leaf Sports and Entertainment, which owns the Toronto Maple Leafs and the NBA Toronto Raptors.
However, the NHL rejected the group’s offer because it would have been structured as a leveraged buyout with debt levels higher than 50 percent of the franchise value — which is against NHL rules.
Bettman in May visited Seattle to learn the status of plans to build a new arena. Hedge-fund honcho Chris Hansen has said in the past he is willing to finance a Seattle arena, but only if he is able to snag an NBA franchise to play in it.
The plan to bring NBA action back to Seattle appears to have fizzled when Hansen partner Steve Ballmer dropped out after buying the LA Clippers for $2 billion.
“He needs a team to get the arena off the ground,” a source close to the situation said.
Gretzky declined comment. The NHL did not return calls.
CREDIT / SOURCE - NEW YORK POST
Posted by Mix Masta B at Monday, July 07, 2014