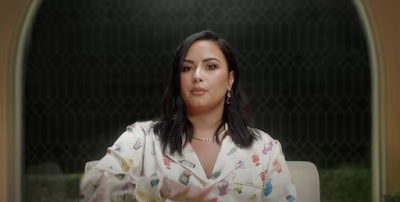 In July of 2018, Demi Lovato was rushed to the hospital due to a near-fatal overdose.

The 28-year-old has spoken about the ways her eating disorder led up to the overdose, but she's never gone into detail publicly about that night.

Well, the trailer for her four-part YouTube documentary series, Dancing with the Devil, dropped today. And she's breaking that silence.

"Any time that you suppress a part of yourself, it's gonna overflow," Demi says in the trailer.

Then, it cuts to shots of Demi partying with friends and yelling, "More!"

"I had three strokes. I had a heart attack. My doctors said that I had five to ten more minutes," the singer continues.

"I’m ready to get back to doing what I love, which is making music. I’m not living my life for other people or their headlines, or their Twitter comments,” she states.

"I was left with brain damage, and I still deal with the effects of that today," she told People. "I don't drive a car, because I have blind spots on my vision."

"And I also, for a long time, had a really hard time reading. It was a big deal when I was able to read out of a book, which was like two months later, because my vision was so blurry."

"Everything had to happen in order for me to learn the lessons that I learned. It was a painful journey, and I look back and sometimes I get sad when I think of the pain that I had to endure to overcome what I have, but I don't regret anything."