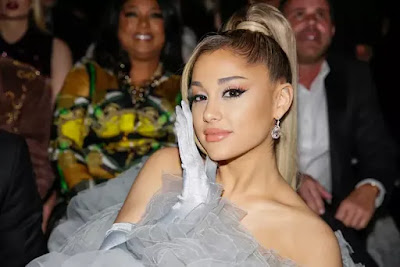 An "34+35" remix from Ariana Grande is coming, and the superstar is teasing two mystery guest artists who will be appearing on the new version of the positions track.

On social media, Ari shared a short video featuring a TV screen with three white silhouettes, one of which is her own judging by the retro ponytail hairstyle from the "34+35" music video. And the two surrounding Grande on both sides have question marks on them, causing fans to guess who they could possibly be. And "34+35 Remix" is also written across the screen.

Although, these mystery guest artists have yet to be officially revealed, some fans are speculating that Megan Thee Stallion could possibly be one after the rapper commented on Ari's Instagram post with several eye emojis.

Another possibility fans are contemplating is Doja Cat. In fact, one fan pointed out that during a previous Instagram Live, the "Say So" singer may have teased her verse on the song after rapping and then following up by singing the "34+35" chorus. If Doja is featured on the remix, it wouldn't be the first time she and Ari have collaborated as Doja also appears on her positions song "motive." Doja was reportedly originally supposed to be featured on "34+35," but her verse was apparently scrapped in favor of her feature on "motive."

Other fans have also guessed one of the guest artists on the remix could also be Nicki Minaj — Ari and Nicki have previously collaborated several times.