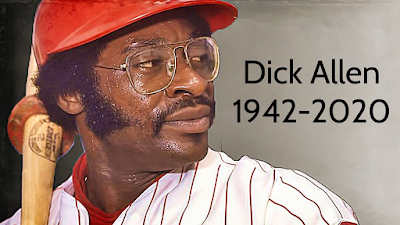 Seven-time All-Star Dick Allen, whose thunderous bat helped him win the 1972 American League MVP Award, died on Monday at the age of 78. His personal Twitter feed announced that he died in Wampum, Pa., the town where he was born in 1942.

Allen played with five teams over 15 Major League seasons (1963-77), spending nine of them with the Phillies, three with the White Sox and the others with the Cardinals, Dodgers and A’s. He is best known for his time in Philly -- the franchise retired his No. 15 in September -- although his MVP season came with the White Sox in 1972, when he led the American League with 37 homers, 113 RBIs and the Majors with a .420 on-base pecentage and 1.023 OPS.

"The Phillies are heartbroken over the passing today of our dear friend and co-worker, Dick Allen," the Phillies said in a statement. "Dick will be remembered as not just one of the greatest and most popular players in our franchise’s history, but also as a courageous warrior who had to overcome far too many obstacles to reach the level he did. Dick’s iconic status will resonate for generations of baseball fans to come as one of the all-time greats to play America’s Pastime. He is now reunited with his beloved daughter, Terri. The Phillies extend their condolences to Dick’s widow, Willa, his family, friends and all his fans from coast to coast.”

Allen finished his career with impressive offensive numbers, batting .292/.378/.534 with 351 home runs, 1,119 RBIs and 133 stolen bases. Among players with at least 7,000 career plate appearances, Allen’s 156 OPS+ -- a stat that adjusts for ballpark and era -- is tied for 14th all-time with Willie Mays and Frank Thomas. Hank Aaron, Joe DiMaggio and Mel Ott sit right behind him on that list.

Despite that, Allen never received even 20% of the vote from the Baseball Writers Association of America in his 14 years on the Hall of Fame ballot. When Allen’s name was reconsidered by the Hall’s 16-member Golden Era Committee in 2014, he came up one vote short of induction. That committee is scheduled for another round of consideration next year.

An outspoken first baseman who came up playing third base, Allen enjoyed a storied career. He debuted with the Phillies at age 21 in 1963 and won the NL Rookie of the Year Award the following season. That was the first of 10 seasons in which he hit at least 20 homers.

Allen led his league in OPS four times, slugging three times, on-base percentage and homers twice each, and RBIs, runs and walks once each. Despite that, he was traded five times. One of those deals, from the Dodgers to the White Sox in December 1971, set up his MVP-winning campaign. He returned to the Phillies in a trade in May 1975, after he refused to report to the Braves following a trade and announced his retirement despite having just won his second home run title in '74.