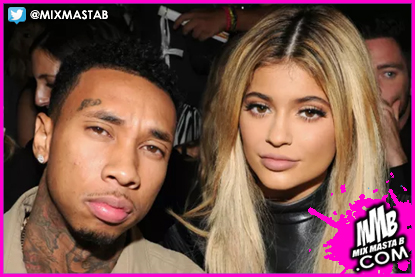 Kylie Jenner and Tyga are either hanging out again or they just keep showing up at the same places coincidentally.

The exes were once again spotted at the same place at the same time on Saturday night (October 5), just days after their first "chance encounter." According to reports, Tyga was the first to arrive at Hyde Lounge in Los Angeles. Kylie then showed up around 1 a.m. in a party bus with her sister Khloe Kardashian. (Fun fact: Khloe's ex Lamar Odom was also at the club). While the "Taste" rapper is said to have left Hyde around 2 a.m. that means he and Kylie were partying for at least one hour together.

The former couple's second run-in comes days after newly-single Kylie denied reports that she had a "2am date" with Tyga after she spotted at the recording studio he was at early Wednesday morning (October 2). As previously reported, the Daily Mail claimed that the young business mogul was spotted at Sunset Marquis where Tyga was working in the hotel's recording studio hours after news broke that she and Travis Scott had split. The outlet claimed that after Kylie partied with her besties — Anastasia 'Stassi' Karanikolaou and Kelsey Calemine — at West Hollywood hot spot Delilah, the group then headed to the studio where Tyga was recording.

In photos shared by Daily Mail, the business mogul was shown looking downcast as she got into her blue Rolls Royce leaving Delilah. However, the outlet claimed that she managed to "stay out of sight" during the stop at Sunset Marque, with one eyewitness claiming "she left via a different exit."

Kylie though denied seeing Tyga, explaining on Twitter Thursday (October 3) that "there was no '2am date with Tyga,' You see me drop two of my friends off at a studio that he happened to be at." The young mogul also addressed her recent split from the father of her child, writing, "Travis and i are on great terms and our main focus right now is Stormi ‼️ our friendship and our daughter is priority."