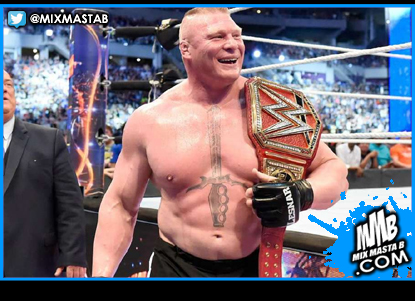 As noted earlier, via Wrestling Observer Radio, the new contract for WWE Universal Champion Brock Lesnar was made on the Monday before WrestleMania 34 at the go-home RAW in Atlanta and was signed on Sunday before the match in New Orleans. This is a new deal and not an extension of the previous deal. Very few people knew about the new deal and Roman Reigns though the was winning the title until the day of the big event. The original ending to the match had Reigns coming off the ropes and getting caught with the F5, but he was to counter it into a Spear for the pin and the win. They changed that finish and went with Lesnar hitting the F5 for the pin. The match went as planned and no one went off-script.
Regarding the length of the new contract, The Wrestling Observer Newsletter reports that it is not listed as a one-match deal but it does end before SummerSlam in August. The new deal allows Lesnar to negotiate one UFC fight while under contract with WWE but the fight would take place after the deal expires.


Lesnar's new deal also includes a significant pay raise. Lesnar is set to defend the title against Roman Reigns in a Steel Cage match at the April 27th Greatest Royal Rumble event in Saudi Arabia and there will likely be other dates between now and August but the two sides will be right back where they started once it expires. It's always possible that a new deal is signed later this year.
On a related note, while almost no one knew of the finish at WrestleMania, Paul Heyman was aware of who would win. The Observer adds that most talent contracts are handled by Triple H and Talent Relations but Lesnar deals with Vince McMahon. As we've noted, Heyman has also just signed a new short-term deal with WWE.
Source: Wrestling Observer Newsletter
Posted by Mix Masta B at Sunday, April 15, 2018