John Cena: 'It's not a WrestleMania without The Undertaker' #MMBMania 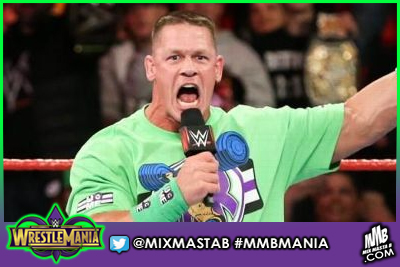 EAST RUTHERFORD, N.J. -- What can WrestleMania give the man who has already drawn so much from the WWE's signature event?

When John Cena said that WrestleMania meant "everything" to him during Friday morning's news conference to formally announce that WrestleMania 35 would take place at MetLife Stadium, it wasn't hyperbole. Including his match at WrestleMania XX, when he beat Big Show for the United States championship (his first WWE title reign), Cena has appeared in 13 of 14 WrestleManias -- and always in a prominent match.


Cena wrestled for a world title in eight of those 13 matches -- including his first career world title win against JBL at WrestleMania -- and sports a 10-3 record that includes the start of six different title reigns. He has never walked into WrestleMania as a champion and left without that title still in hand.

Last year, Cena made a different kind of moment in Orlando when he asked his longtime girlfriend, fellow WWE superstar Nikki Bella, to marry him in the middle of the ring after their victory over the similarly coupled Miz and Maryse. Considering everything Cena has done at WrestleMania and done for the WWE, he would be well within his right to return a few weeks before the show, declare an opponent of his choice and coast into a headlining appearance.

But Cena, even though he's in one of the busiest periods of his professional life both inside and outside the WWE sphere of influence, has taken it upon himself to be as active as anyone on the roster. He's bounced between Raw and SmackDown, firing off some of the best promos of his career. Cena's ongoing fight to find a place on the WrestleMania card has carried him through the Royal Rumble and Elimination Chamber without success, despite great matches and wins over active champions The Miz and AJ Styles.

For everything WrestleMania and the WWE have given him, Cena is still fully on board in being a team player -- and it shows in the energy and creativity he's brought to both in the lead-up to New Orleans.
"It is like a team entering what they call, 'the second season,'" Cena said to ESPN. "You work so hard and then realize you're in the bracket and then week after week, everything becomes more and more hyped and the energy, the investment, becomes more and more intensified, culminating with WrestleMania. That's why it is our March Madness, the Super Bowl, The Masters, the NBA Championship, the World Series -- that it is our version, and has a similar build-up to that.
"You start around late December and that's when second season starts for us," Cena continued. "It culminates April 8, then we'll start again April 9. We just don't have the offseason like the other guys do, but I wouldn't have it any other way."
Even after 15 years of going full bore at every opportunity he's received, Cena has an enthusiasm for finding what's next and throwing himself into that thing with every fiber of his being -- as if he was still an up-and-coming WWE superstar still looking for his first big break.
If there's one major change between the John Cena who won the U.S. title against the Big Show in 2004 and the John Cena of 2018, it's that 15 years of WWE experiences and memories have put him into a position to appreciate just how far he's come.
"I'm at a point in my career and my life where I appreciate every second of what's going on," said Cena. "This has been a wonderful ride for me, and I'm finally at a point where I'm both active and enjoying it -- every single second of it."
With all that said, as of Monday morning John Cena does not have a match locked in for WrestleMania 34 yet. He finished third in the Royal Rumble, and didn't win the Elimination Chamber match. But after teasing a challenge for The Undertaker that got pushed to the side because of "backstage reasons" as Cena pursued the WWE championship, Cena returned to his ultimatum last Monday in a promo.
Cena vs. Undertaker, outside of a single pay-per-view and a handful of TV matches well over a decade ago, has somehow never happened one-on-one on any stage since 2006. It is a WrestleMania-worthy match that Cena himself has been talking about since at least 2016. While some would prefer that The Undertaker's incredible run of WrestleManias remain closed out with a 23-2 record after a match last year against Roman Reigns that didn't quite meet expectations, Cena feels as though it's not quite time for 'Taker to walk away.
"At my core, I'm a fan," Cena said. "I'm a member of the WWE universe and I've thought about this a lot. I was emotionally moved when the streak was broken. Last year was an emotional performance. Then you get closer and closer to WrestleMania, and you realize it's not a WrestleMania without The Undertaker."
Some 27 years ago this week, Undertaker walked into the Los Angeles Memorial Sports Arena and began a WrestleMania run that no one will ever come close to matching. Since that time, Undertaker has missed just one WrestleMania -- early on, in 1994 -- and as Cena looks toward his own legacy, his window at a shot at The Undertaker is closing.
But it hasn't closed yet.
"You hold the ticket in your hand and you realize a portion of that ticket goes to hearing his music, seeing The Undertaker. That is WrestleMania," said Cena. "I know there will come a day where that changes -- I just don't think it's now. Whether it happens or not, it is officially out of my hands, and I think it's out of everyone else's hands except one person."
As for fans who might question what Cena vs. Undertaker would actually look like, and what it would mean, Cena makes a simple point to drive it home.
"If it does happen, I don't think anyone who buys a ticket to WrestleMania will walk away throwing the stub up in the air going, 'I wish he wouldn't have showed up,'" Cena said. "I hope he does. I hope he understands the impact that he has on the current WWE Universe. He is WrestleMania."