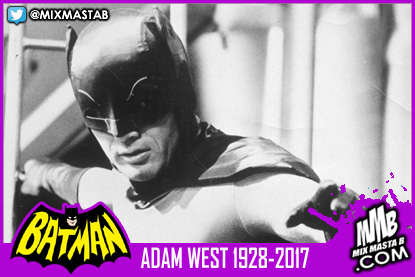 It took a generation, but Adam West finally got his due as a hero among superheroes.

West, who died June 9 at the age of 88, became synonymous with Batman after he donned the mask and cape for the 1966-68 series that was a smash for ABC. The half-hour show was so of its era — a pop art painting writ large as a tongue-in-cheek action comedy — and so popular that for a brief period, ABC aired the episodes twice a week.

The campy attributes made it easy for the industry to dismiss the show as a mindless TV confection aimed at teenagers who read comic books. West famously struggled in the years after “Batman” to move his career forward. But he never succumbed to bitterness. His lean years in the 1970s only made him more appreciative of the recognition and the work that came later in life.

“He never felt he’d missed out,” says Burt Ward, who played West’s sidekick, Robin, on “Batman” and remained a close friend for a half-century. “He knew that ‘Batman’ meant something to people. Having people stand in line for hours to see you [at events like Comic-Con] — it’s not such a bad thing.”
By the early 1990s, those kids who had made “Batman” appointment TV (at the same Bat-time on the same Bat-channel), and a younger set who grew up with the show in reruns, celebrated West as the actor who would always be the seminal Bruce Wayne/Batman in their eyes. Most important that generation was able to hire him. West enjoyed a resurgence during the past 25 years thanks to the adoration he received from creatives such as Seth MacFarlane, Kevin Smith, Conan O’Brien and Seth Green. There was newfound appreciation for the comedic chops it took for West to pull off his performance in “Batman.”
West was a regular in MacFarlane’s Fox animated comedy “Family Guy,” playing the inept Mayor Adam West of Quahog, Rhode Island, from its early days through the most recent season. He did sitcom guest spots, kids’ shows, pilots (the 1991 Conan O’Brien-Robert Smigel-produced NBC cop-show spoof “Lookwell” is legendary), movies, commercials and a stream of autograph and photo-op appearances. He made a career out of being Adam West — and by all accounts, he loved every minute of it.
“I was always impressed when I’d watch him at Comic-Con by his grace with the fans,” says Ralph Garman, fellow “Family Guy” voice actor and longtime friend. “He was always warm. He recognized how much it meant to the fans to meet him.”
Garman, a self-described “Batman” fanatic whose office is packed with memorabilia from the ABC show, led the campaign to secure a star on the Hollywood Walk of Fame for West in 2012. They worked on numerous projects together, including the “Hollywood Babble-On” pilot for AMC that included the bit “West on West,” featuring the actor’s dramatic readings of Kanye West lyrics. “No matter what the project was, he came in with ideas and energy. He always had good suggestions,” Garman says. “He loved the process. He loved working with other actors and writers.”
There wasn’t much difference between the on-screen person and the off-screen man, Ward and Garman say. West had a fabulous sense of humor and a great intellectual curiosity about the world. He was a wine aficionado, a tennis player, a cook and an art buff. He was by turns “dignified, suave, silly and playful,” Ward recalls.
West and Ward clicked “within 30 seconds” of their first meeting for the “Batman” pilot on the 20th Century Fox lot in 1965, Ward recalls. They had a similar sense of humor that was key to making the show work. Over the next 50-odd years, the two were constantly together on the personal-appearance circuit and on “Batman” retrospective and reunion projects. The Wests and the Wards bonded as an extended Bat-family.
West in recent years got a kick out of helping Ward promote his latest business venture, the Gentle Giants line of organic dog food, by telling fans that he kept in shape by eating a bowl of it every morning. Ward never asked him to plug the product — it was something that he did for a laugh and out of generosity to his Boy Wonder.
“He was just somebody who was fun to be around,” Ward says with a catch in his voice. “I loved him.”
CREDIT // SOURCE - @Variety_Cynthia
Posted by Mix Masta B at Tuesday, June 13, 2017