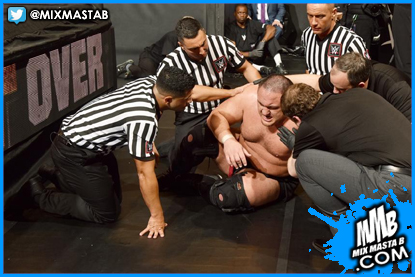 NXT TakeOver: Brooklyn II did not go as planned for Samoa Joe. Not only did the submission specialist lose the NXT Championship toShinsuke Nakamura, but he left the Barclays Center with a lasting memory of his war with The King of Strong Style.

The former champion sent out a tweet Monday morning, revealing that he suffered a dislocated mandible in the hard-hitting war with Nakamura.


The injury may have come when The King of Strong Style clobbered Joe in the face with the Kinshasa knee strike. Joe was seen favoring his jaw after the battle, and he was tended to by officials and medical staff following the bell. The severity of the dislocation remains unknown, leading many in the NXT Universe to wonder just how long the submission specialist will be out of action, or if he can even open his mouth to talk.

For more news on this story as it develops, stick with WWE.com and tune in to NXT, every Wednesday at 8/7 C, only on WWE Network.
Posted by Mix Masta B at Monday, August 22, 2016