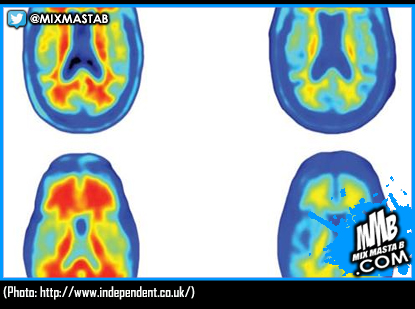 Researchers scanned the brains of people with the degenerative condition as they were given doses of the drug, which is based on an immune cell taken from the blood of elderly people aged up to 100 who showed no signs of the disease.
After a year, virtually all the toxic “amyloid plaques” that buildup in Alzheimer’s patients appeared to have gone from the brains of those given the highest doses of the antibody.


The scientists, who described their results in a paper in the journal Nature, also said the patients showed signs that the rate of their cognitive decline had slowed.
The findings of the trial suggest the plaques are at least part of the cause of the disease – not simply a byproduct.
And, if the results are confirmed in larger clinical trials already under way around the world, one expert said it could be a “game-changer” for efforts to prevent Alzheimer’s.
One of the researchers, Professor Roger Nitsch, of Zurich University, described what they found when they scanned the brains of patients given either a placebo or three different doses of the antibody, called aducanumab.
“One year later, the images of the placebo group are basically unchanged. In the three doses groups, a very clear reduction in amyloid plaques is shown – the higher the dose, the larger the degree of reduction,” he said.
“In the 10mg dose group, after one year you can see no red on the image, meaning the amyloid has almost completely disappeared.
“Compared to other studies published in the past, the effect size of this drug is unprecedented.”
Commenting on the research in a separate Nature article, Professor Eric Reiman, of Arizona University, wrote: “If these preliminary cognitive findings are confirmed in larger and more-definitive clinical trials, which are now under way, it would provide a shot in the arm in the fight against Alzheimer’s disease.
“But although the authors’ additional cognitive findings are encouraging, they are not definitive. It would be prudent to withhold judgement about aducanumab’s cognitive benefit until results from the larger trials are in.”
But he added: “Confirmation that an anti-amyloid plaque treatment slows cognitive decline would be a game-changer for how we understand, treatand prevent Alzheimer’s disease.
“Now is the time to find out.”
The study, led by scientists at pharmaceutical companies Biogen and Neurimmune, sparked major interest from experts in the field.
Dr Tara Spires-Jones, interim director of Edinburgh University’s Centre for Cognitive and Neural Systems, said the research showed the antibody “robustly reduced amyloid pathology in a small group of people in very early stages of the disease”.
“I am cautiously optimistic about this treatment, but trying not to get too excited because many drugs make it through this early stage of testing then go on to fail in larger trials,” she said.
And Dr James Pickett, head of research at the Alzheimer’s Society, said: “These results are the most detailed and promising that we’ve seen for a drug that aims to modify the underlying causes of Alzheimer’s disease.
“The study showed that the drug was first able to remove clumps of amyloid – a toxic protein associated with Alzheimer’s – from the brain of mice and also, excitingly, in people.
“What is most compelling is that more amyloid was cleared when people took higher doses of the drug.
“No existing treatments for Alzheimer’s directly interfere with the disease process – and so a drug that actually slows the progress of the disease by clearing amyloid would be a significant step.”
He noted that the researchers had found some side-effects, such as headaches, and that the initial trial had not been designed to measure whether the drug slowed the decline in memory and thinking.
“While there were hints that it might have an effect on the symptoms of the disease, we need to see the results from further, larger research trials to understand whether this is the case. These larger trials are now under way, including in the UK, and due to finish in 2020,” Dr Pickett said.
However Gordon Wilcock, emeritus professor of geratology at Oxford University, was somewhat downbeat about the findings.
“This is preliminary data about another monoclonal antibody targeting amyloid in Alzheimer's disease, but whether it will really produce meaningful clinical benefit only definitive phase three clinical trials will show, as the researchers themselves state,” he said.
“We have already had previous trials of various anti-amyloid strategies, especially the monoclonal antibodies, that have failed to deliver at phase three.
“Nevertheless these trials are justified by the data and I hope they are successful, despite my feelings of déjà vu!”
Posted by Mix Masta B at Wednesday, August 31, 2016