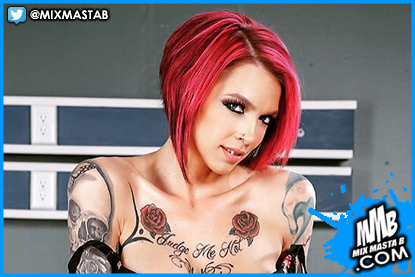 Gushing in ‘Squirt-a-Holic’ Enough to Make Anyone an Addict
VENICE, CA – Anna Bell Peaks has made a big name for herself over a relatively short career and a pair of new titles from New Sensations/Digital Sin showcase two of her most famous talents.
The Twenty: Self Pleasuring from Digital Sin focuses on her ability to excel in a solo scene, which the company knows well since Anna was nominated for and AVN Award for Best Solo/Tease Performance for the company’s I Love Big Toys 41 movie. Anna also won Camgirl of the Year and Perfect Pussy trophies at the 2015 Inked Awards, further showing her ability to get things done on her own.
Another great talent of Anna’s is certainly her ability to squirt, which will be showcased in the collection Squirt-a-Holic from New Sensations. She is known as one of the industry’s most prodigious squirters and director William H captured one of her finest, wettest moments.
“I’m excited for these movies to come out because they are really geared toward people with specific interests,” Anna said. “So if someone is really into solo stuff or squirting, they will really get what they want from these releases. Everyone knows that NSDS does amazing work and can be certain these will be very satisfying indeed!”

Anna will be featuring at the Cadillac Lounge in Providence, RI, next week. Follow @thecadillacloun for all the juicy details.
Check out the trailer for The Twenty: Self Pleasuring athttp://promo.newsensations.com/product_info.php?products_id=3185. For more onSquirt-a-Holic go to http://promo.newsensations.com/product_info.php?products_id=3186.
Check out the trailer for her new “Cum on My Tattoo” scene athttp://www.burningangel.com/en/video/BurningAngel/118073/?utm_source=201954&utm_medium=affiliate&utm_campaign=.
She has a new YouTube channel at (https://www.youtube.com/channel/UCuRqetmEVU6AUFHeWa85p7A). Check out her ManyVids selection at https://www.manyvids.com/Profile/152830/Anna-Bell-Peaks/. To contact Anna for custom boy/girl or girl/girl videos or to order one-on-one Skype time with her, email annabellpeaksxx@gmail.com. Check out her website atwww.AnnaBellPeaks.xxx.
Catch her webcam shows at MyFreeCams and ImLive by looking for Anna Bell Peaks. She cams every day she’s not on set, typically 11 am-4 pm EST and 11 pm-3 am EST. Go tohttp://www.myfreecams.com/#annabellpeaks. Connect with her with Chaturbate athttp://chaturbate.com/affiliates/in/7Bge/n5KgV/?room=annabellpeaksxx.
Book her for shoots through OC Modeling at http://ocmodeling.com/model/anna-bell-peaks/. Feature engagements can be booked through Derek at Lee Network and Dave Michaels at A-List Features. Go to www.theleenetwork.com/stars.php?id=127 andwww.alistfeatures.com. Dig her website at www.AnnaBellPeaks.xxx.
Follow her on Twitter (@annabellpeaksxx) and connect with her through Dream Lover athttp://www.dreamlover.com/AnnaBellPeaks. For everything Anna Bell Peaks go towww.risingstarpr.com.
Posted by Mix Masta B at Tuesday, July 19, 2016