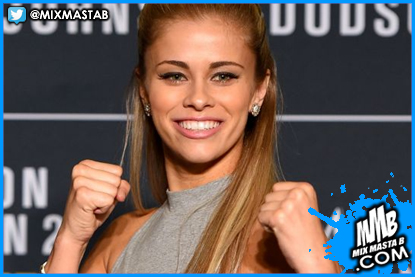 Add eighth-ranked UFC strawweight and"Dancing With the Stars" finalist Paige VanZant to the ridiculously long list of fight fans hoping to see Ronda Rousey and Cris "Cyborg" throw down in the Octagon.

VanZant was leaving an event when TMZ caught up with her and, of course, asked her take on the potential fight.

As far as whether she thought Rousey could pull out the victory, VanZant was a tad more reserved.

"That's a tough call. I mean, I'm not going to make that call. I'd rather just watch the fight." VanZant declared.

VanZant has long expressed her admiration for Rousey. But earlier this month, she revealed that the former women's bantamweight champion lashed out at her during a Reebok shoot about congratulating Holly Holm after UFC 193.

That bout marked Rousey's first career loss, and the last time fans have seen her in the Octagon. Despite the setback, many are still hoping Rousey returns to even the score against Holm (who went on to lose the belt to Rousey's two-time foe Miesha Tate), and eventually fights all-time women's MMA great Cyborg.

Cyborg is coming off her first win under the UFC banner at UFC 198, where she dismantled game opponent Leslie Smith in just 81 seconds for her 14th career knockout. However, the fight took place at a catchweight of 140 pounds, something that Rousey has expressed a clear disinterest in.
No telling if Cyborg and Rousey will ever actually cross paths, but VanZant, like most fight fans, is keeping her fingers crossed it happens.