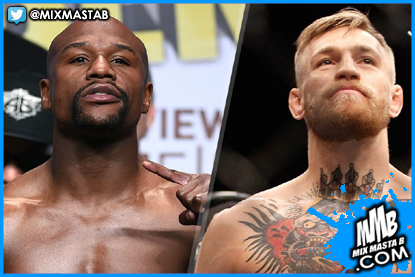 The two are reportedly in talks for a multimillion-dollar fight that would occur in Las Vegas this summer, and an announcement may be made within weeks, The Sun reported, citing an unnamed source.


Floyd Mayweather and Conor McGregor look set to go one-on-one in what could be one of the biggest and richest fights in boxing history.
According to The Sun, the 39-year-old will come out of retirement to fight and put his joint-best boxing record in history of 49 wins and zero losses on the line against the UFC fighter in a boxing match, which is expected to take place in Las Vegas at the new arena inside the MGM Grand.
McGregor is only expected to make $7 million from this bout, while Money Mayweather, on the other hand, could earn a staggering $100 million. According to the paper, the only thing left to do for the fighters is to agree upon the purse and sign the documents.
Posted by Mix Masta B at Friday, May 06, 2016