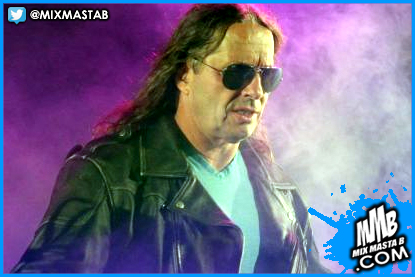 WWE Hall of Famer Bret Hart reviewed WrestleMania 32 on the latest episode of hispodcast, and the five-time WWE champion blasted the The Rock's segment in the show and said he didn't agree with many of the results (Hart said prior to WrestleMania that the main card was "the worst in history.")

"I was really disappointed with a lot of the outcomes. The booking in general was maybe just not up to snuff for me."
Hart reviewed each of the matches on the card and praised the Brock Lesnar-Dean Ambrose match for being believable, but ripped WWE for belittling current talent in segments featuring WWE legends Stone Cold Steve Austin, Mick Foley and Shawn Michaels (who beat up the League of Nations and the New Day), and later on, The Rock (who beat up the Wyatt family).

"For me, I think it was another case of a bunch of dweebs sitting around a table going 'you know what I think this is what we should do.' Again there's no reality to it. Rock suddenly has his trunks on under his sweatpants like the whole thing was staged. That's what killed it for me, as soon as I saw him pull off his sweats it's like 'this is all set up.'
.... The truth of it is probably Rock picked up more money, got a bigger check than all the wrestlers in that battle royal, except for Shaq. I don't know what he got but he definitely didn't get what Rock got. All the Cody Rhodes, and all the girl wrestlers, all the rest of them you could stack their paychecks one on top of the other and they're not going to make anything close to what Shaq made, they're not going to make anything close to what The Rock made, and they're the ones that are on the road 300 days a year."

Hart said that the best two matches of the weekend happened on the NXT:TakeOver show on the Friday before WrestleMania,

"I thought that [Nakamura vs. Zayn] was the best match of the whole WrestleMania. And think the other match with the two girls, Asuka and Bayley, that was a better match than any of the other matches, men included, at WrestleMania. I would have paid to see just those two matches.... the WrestleMania card was all glitz, there was no real wrestling on it. All the real wrestling - the kind of wrestling that I like, that goes right to my heart - was in those two matches."