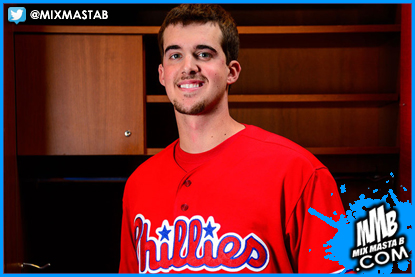 
The Phillies have worn red in a regular-season game at least twice in their history. The last time was for a Turn-Ahead-The-Clock promotion on Sept. 11, 1999. More infamously, the Phillies donned all burgundy — including pants — for what was dubbed a "Saturday Night Special" on May 19, 1979.
They were never worn again.
"We're excited to bring a new, colorful look to Citizens Bank Park this year," said David Buck, the Phillies' senior vice president of marketing and advertising sales. "We have great respect for the history of our uniform, so by going with a simple, classic design, we feel we've been able to balance a new look with our storied tradition."
The Phillies will wear the red jerseys on April 14, May 18, June 8, June 20, July 6 and Aug. 4.
CREDIT // SOURCE - Matt Gelb // Philly.com
Posted by Mix Masta B at Thursday, April 14, 2016