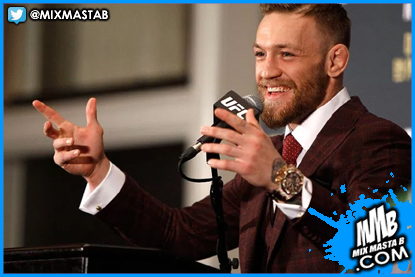 Conor McGregor shocked the world on Tuesday when he apparently announced his retirement from mixed martial arts and the UFC via Twitter.

McGregor dropped the bombshell out of nowhere just a day after landing in Iceland to continue his training for UFC 200 where he's expected to meet Nate Diaz in the main event.


Now McGregor has been known to say some crazy things via Twitter in the past like the time he self-inducted himself into the UFC Hall of Fame.

It seems highly unlikely McGregor is actually going to retire considering he's headed towards the biggest event of the year at UFC 200 where he will likely earn another seven- or eight-figure payday for his rematch with Diaz.

No one from McGregor's camp was immediately available for comment when reached by FOX Sports on Tuesday.

It's unclear just how serious McGregor was with the tweet, but it seems he's sending a message with a threat of retirement from the sport just three months out from UFC 200.

I have decided to retire young.
Thanks for the cheese.
Catch ya's later.
— Conor McGregor (@TheNotoriousMMA) April 19, 2016


It's more likely McGregor is stuck in some kind of dispute with the UFC but at this time neither side is saying much of anything after the message was released on Twitter on Tuesday.