The Total Divas vs. B.A.D. & Blonde At WrestleMania #MMBMania 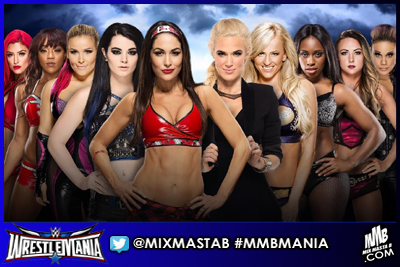 Battle lines have been drawn, and at WrestleMania, “Total Divas” Brie Bella, Paige, Natalya, Alicia Fox & Eva Marie will attempt to put aside their differences long enough to take down the squad of B.A.D. & Blonde, featuring Lana, Naomi, Tamina, Emma & Summer Rae.
With seemingly incompatible elements on both sides, the newly confirmed match is proof that common enemies can lead to the unlikeliest of partnerships.


The bout also marks the in-ring debut of the Diva who sparked the war in the first place: Lana. The Ravishing Russian began targeting Brie Bella weeks ago, and soon aligned herself with Team B.A.D. Though Lana’s campaign against Brie began with one of her characteristic verbal assaults, in a surprise move, it then turned physical, with Lana ambushing the former Divas Champion and using the Bella Twin’s own signature move against her.
The trio’s brash behavior rankled their peers, even to the point where known Bella nemesis Paige agreed to side with Brie if it meant getting her hands on The Ravishing Russian.
CREDIT // SOURCE - WWE
Posted by Mix Masta B at Monday, March 28, 2016